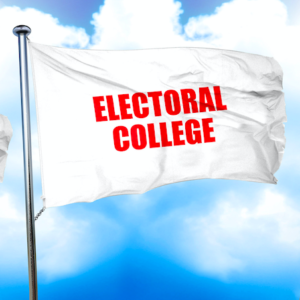 Anti-Electoral College advocates see a window of opportunity to eliminate America’s unique presidential election system. They are seizing the moment, working to implement change before anyone realizes what happened.

They even think they can do it without a constitutional amendment.

National Popular Vote (NPV) is a California-based effort that has been running under the radar.  Its proponents ask state legislatures to agree to an interstate compact. By the terms of that simple contract, each participating state would agree to allocate its entire slate of electors to the winner of the national popular vote. This is a change from the current system in which states award electors based on the internal state popular vote.

NPV claims it is simply using constitutional provisions in a unique way. In reality, the compact would effectively eliminate the Electoral College.

NPV’s plan goes into effect when states representing 270 electoral votes (enough to win the presidency) have agreed to the compact. To date, 11 states plus D.C. have approved the measure. Those states hold 172 electoral votes among them. NPV hopes to reach 250 electors by the end of the year. They would need just 20 more during the early months of 2020 to put their plan into action before the presidential election.

The idea is gaining steam. The Colorado Senate recently approved the idea, and a House committee is considering the matter this morning. Similarly, the New Mexico House recently approved NPV, and a Senate committee is expected to take up the matter soon. More efforts can soon be expected in places like New Hampshire, Oregon, Minnesota, and Virginia, where the legislation is pending.

NPV proponents rely heavily on simple sound bites such as “every vote equal” or “one person, one vote.” The sound bites are certainly appealing: They sound fair-minded and democratic. Ironically, though, NPV would ensure the precise opposite of its stated goal. If its compact goes into effect, NPV would guarantee unequal treatment of voters.

Some of the reasons are obvious. Others less so.

First, small to mid-sized states can never receive equal treatment under a national popular vote system. How can they?  Candidates have limited time and resources. They will not work to build support across state and regional lines without an Electoral College to force the subject. Consider that Hillary Clinton won fully 20 percent of her individual votes from only two states: New York and California. The mistake cost her the election. But without the Electoral College, she would be rewarded for such behavior, and candidates would be sure to double down on the strategy. New Hampshire, Wyoming, and other small states would easily be lost in the shuffle.

NPV guarantees unequal treatment of voters for a second, less obvious reason: NPV is state legislation, not a constitutional amendment. States participating in NPV cannot tell non-NPV states what to do. Thus, NPV cannot authorize creation of a single, national election code to govern everyone nationwide. Instead, some people will be given more time to vote, simply because of their state of residence. Others might have an easier time getting an absentee ballot than those in neighboring states. Some people might have ballots that contain more third-party options.

If the most basic rule of democracy is that the same set of laws should apply equally to everyone in the same election pool, then NPV will violate this rule egregiously, every presidential election year, without fail.

NPV guarantees unfair treatment of voters in one final way: It acts as if “consent of the governed” is unimportant, pretending that a simple interstate compact can be used in lieu of the constitutional amendment process. “We the People of the United States” consented to a Constitution that creates a state-by-state presidential election system. The Electoral College is just one of many checks and balances in our constitutional republic, preventing a bare, emotional, or tyrannical majority from running roughshod over the rest of the country. “We the People” agreed that this process can be changed only if three-quarters of the states agree. Yet NPV attempts to skirt this process entirely.  It is prepared to radically change the presidential election system, whether “We the People” consent or not.

Apparently, NPV doesn’t care so much about fairness after all.