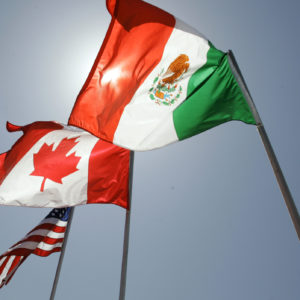 The National Security Threat of a NAFTA Pullout

President Donald Trump has argued that the past approach to trade and immigration has allowed companies to undercut workers with cheap foreign labor. He pledged to withdraw from or renegotiate trade agreements so they better serve American workers. But many economists fear he could inadvertently hurt those very same workers.

The North American Free Trade Agreement (NAFTA) has become a major focus for the administration. The president has already begun the process of renegotiating the massive trade deal with partners like Canada and Mexico. He has threatened to pull out during negotiations which sparked concern from the business community.

The Heritage Foundation hosted the senator along with a panel of experts to discuss the national security implications of a NAFTA pullout. The conservative think tank also released a report arguing that the trade deal has helped to promote free markets and economic freedom by strengthening institutions that promote the rule of law.

Sasse argued that the bigger issue impacting workers is that technology has been changing at a rapid pace. But the senator also added that national security should also be considered alongside the economic concerns. He argued that trade helps countries avoid disputes that could lead to war.

“When you have a lot of economic relationships between two countries or between a block of countries, when you have a lot of commerce between people, you end up building others kinds of relationships, as well, which often have huge global security implications,” Sasse said. “This isn’t really all that profound. It turns out you’re less likely to go to war with people that you know, like, and have shared interests with.”

The United States building strong relationships with trading partners could also be helpful in putting increased pressure on countries that are actually known for cheating, like China – a country the president has singled out himself. Sasse argues we shouldn’t hurt good trading partners while going after the bad ones.

President Trump has instead looked to policies that restrict trade more generally. He announced that new steel and aluminum tariffs would be imposed March 8. He has also put tariffs and quotas on products like dishwashers and solar panels. The goal being to punish countries that cheat – while prioritizing domestic workers and production.

Sasse and many economists have argued that workers and consumers will actually be left worse off. The increased costs from tariffs could go down the supply line which means higher prices for consumers – or a limited supply of products. That disruption in economic activity could lead to decreased job opportunities.

Sasse argued that lawmakers haven’t been having an honest and clear conversation about what is actually happening to jobs. He believes that the bigger problem is the technological revolution the country is going through. While technology has had a huge benefit on the economy, there are many workers who have been hurt. They have skills that are being replaced with advanced robots and computers.

The Bureau of Labor Statistics (BLS) recently reported that job openings currently stand at 5.8 million. The number of unemployed persons per job opening has steadily declined over the last decade, but there are still millions of working-age adults without work. A mismatch in needed skills is likely to blame in part.

NAFTA became a critical component in the national economy when it was implemented in 1994. The agreement reduced or eliminated tariffs and other trade restrictions to open up more access among the partner countries the United States, Canada, and Mexico. It was able to increase trade dramatically in the region.

NAFTA has also been a major point of contention since it was first implemented over two decades ago. Critics have argued the trade deal has benefited large corporations or foreign workers at the expense of domestic workers. But to supporters, the trade deal has been vastly more beneficial than not.

The American Action Forum, a center-right nonprofit, released a report Dec. 11 claiming that withdrawing from the trade deal could jeopardize 14 million jobs. The report also found that withdrawing could expose businesses to $15.5 billion in new tariffs and increase consumer costs by at least $7 billion.

U.S. Trade Ambassador Robert Lighthizer detailed during a congressional hearing June 22 that the administration plans to renegotiate trade deals to be fairer and more efficient, enforce trade deals more aggressively, and increase domestic exports. Trump has summarized his plan as, America first, but not alone.

Trump was also able to upend another major trade deal before it was fully implemented by withdrawing from the Trans-Pacific Partnership (TPP). The agreement would have been the largest regional trade deal in history at roughly 39 percent of global GDP.

The seventh round of negotiations ended earlier this month in Mexico City, Mexico.