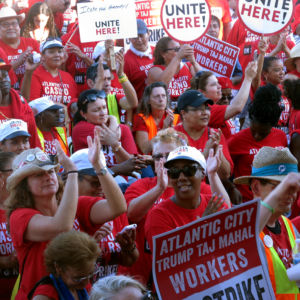 A Los Angeles County based hotel workers union became the subject of a national watchdog campaign Thursday over allegations it deploys a self-interested and harmful agenda.

Unite Here Local 11 represents hotel, gaming, food service, manufacturing, and airport workers throughout Southern California and Arizona – at about 23,000 members. The local union has also involved itself in statewide political fights like raising the minimum wage.

The Center for Union Facts (CUF), a union watchdog, claims the local has a history of deploying disruptive tactics to advocate for a harmful agenda. The group launched the Eyes on Local 11 campaign in an attempt to expose the alleged behavior – which includes a minimum wage controversy, questionable advocacy, and support for unpopular development projects.

“For years, Local 11 has employed the most aggressive tactics to enact its self-serving development agenda despite fierce public opposition,” CUF communications director Luka Ladan told InsideSources. “The Eyes on Local 11 campaign will finally hold the union accountable and highlight the startling disconnect between Local 11’s dues-hungry leadership and the rest of Los Angeles County, especially union members. Sunlight is the best disinfectant, and it’s about time we shined a light on California’s most controversial union.”

Local 11 responded to the campaign by dismissing CUF as an extreme right-wing organization with a hateful, anti-worker, and anti-environment agenda. Local 11 communications director Andrew Cohen also denounced the founder of the group, Richard Berman – a former business lobbyist who has started several organizations that have frequently clashed with unions on many policy fronts.

“Union busting is a big business and as more workers see the benefits of having a union, we become a bigger target,” Cohen told InsideSources. “We plan to organize the unorganized until working people have a real voice of their own in this country, so we expect right-wing extremists to attack us.”

The CUF also launched a website which will serve as a platform for union members and local residents to share their personal experiences. The website includes additional information about the union, like its finances, development agenda, and alleged egregious tactics.

“We have not spoken to any union members or local residents yet, but the website just launched,” Ladan said. “We fully expect Southern Californians to come forward and share their experiences with Local 11, now that there is a viable platform to do so. The campaign will have a significant digital presence, which includes social media outreach to people in the region.”

Local 11 was alongside a handful of other unions who reportedly fought for an exemption when the Los Angeles City Council voted to raise the minimum wage for hotel workers to $15 an hour in 2014. The exemption would have allowed unionized workers to be paid less than the minimum wage – a move critics saw as underhandedly making union labor more desirable to employers.

“We are a worker’s rights organization and work to effect change on an industry-wide level. Living wage laws benefit workers across the industry in whatever city enacts them,” Cohen said. “In LA, the ordinance requires companies to pay the living wage or negotiate with their employees. Workers in union hotels make substantially more than the living wage requires, but for some positions, those wage increases are seen in service fees, healthcare benefits, pensions etc. instead of their hourly wage.”

Ladan detailed those concerns a day before the campaign launched in an op-ed for the Los Angeles Daily News. The piece argues that the local union will stop at nothing to organize hotel employees – including waking up local residents by its frequent use of bullhorns in the morning to make a dramatic statement.

“Unite Here’s tactics negatively impact the vacations of our visitors, whose dollars make our city run.” Cynthia Head, former head of the Anaheim Historical Society, told the OC Weekly, in a 2010 article about how those tactics have impacted Disneyland. “When I see them shutting down streets, that makes the community look foolish—and that’s not a way to get the community behind you.”

The Eyes on Local 11 campaign noted particular concern over the union supporting hotel development projects, like in Los Angeles and Long Beach. The campaign argues that the union will actively support or oppose new hotels over whether they stand to benefit – like when management agrees to use unionized workers.

The union has supported proposed hotels that exceed existing building height limits like in the case of Santa Monica – where most residents opposed construction that altered the skyline. The campaign argues that the union supported the projects because bigger hotels meant more dues-paying members.

“We work with our members and the community to promote responsible development that reflects the interests of the people who live and work in the cities where we organize,” Cohen said. “But to be clear, we have opposed more projects than we have supported.”

Cohen reiterated that the union is a workers’ rights organization that fights for employees. He added that the union strives to improve the conditions in the industries it represents while proudly engaging in peaceful protests.