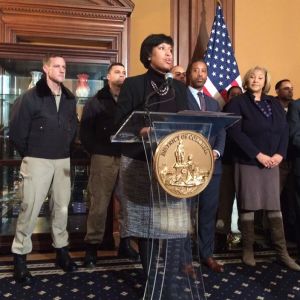 The District of Columbia positioned itself as a national leader on criminal justice reform Wednesday, enacting what Mayor Muriel Bowser called “the most comprehensive, innovative” police body camera program in America.

Bowser, a Democrat, signed the law saying D.C.’s system will also be “one of the most transparent,” allowing broad public access to footage while protecting privacy of civilians.

“We know that body-worn cameras make our communities safer and stronger,” the mayor said. “They increase accountability among all parties involved in public safety interactions.”

After spending the past year piloting cameras with 400 police officers, D.C. will have all 2,800 of its patrolling cops wearing one by next summer. A shipment of 700 will arrive in February. The rest will come by June.

The District is one of many U.S. cities hoping cameras can strengthen trust between law enforcement and communities, particularly those of color. The body-worn devices emerged as a popular policy response to recent high-profile police violence against unarmed black men and women — episodes that sparked national outrage and fueled activism such as the Black Lives Matter movement. At the same time, many police forces have welcomed the new technology, saying it can help them do their jobs better.

Kenyan McDuffie, chairman on the D.C. Council’s judiciary committee, hailed this tool of “21st century policing” as a victory for the nation’s capital, but said in a statement he was “deeply concerned” about one part of the legislation: “the amendment that was passed on final reading of the bill which allows an officer to review footage before they write their initial reports. I am concerned that officers may only describe what is in the video, rather than provide their complete and unfiltered memory of events.”

Still, he told InsideSources cameras are a good tool in moving toward “smart on crime” policies. “We’re getting away from the ‘tough on crime’ laws that focused on over policing in communities of color and essentially ended up with over incarceration of huge amounts of people,” the chairman said.

McDuffie and his Council colleagues had already modified the mayor’s initial camera plan earlier this year. At the outset, she wanted all footage kept private. The final law prevents the public from seeing only what’s shot inside residences or related to domestic violence, sexual assault and stalking. Bowser can choose to release this sensitive footage on a case-by-case basis in “matters of great public interest.” She said those would include police shootings, custody deaths or incidents involving serious bodily injury.

Other cities implementing cameras include Chicago and Los Angeles, but District officials said policies in those places don’t compare to what D.C. is doing.

“When you look at other programs around the country, the very few that are this extensive in public access are in pilot phases,” said Deputy Mayor for Public Safety Kevin Donahue. “Having something across the entire department of a large city and having it be comprehensive is a combination that puts us at the leading edge.”