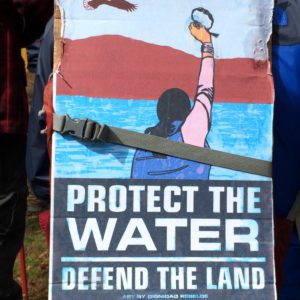 Friday was a busy day for American environmental activists. The UN Climate Conference in Bonn, Germany came to a close. At the same time, the Keystone pipeline suffered a leak in rural South Dakota. Speaking from Germany, where they had joined other environmental protesters who opposed America’s leaving the agreement, Native American environmental activists both praised the goals of the agreement and criticized it for failing to uphold indigenous rights and for supporting carbon offset programs.

“During the COP23 conference there has been engaged discussion on the mitigation of climate change and the implementation of the agreements made in Paris during COP21. However, it’s been a real struggle to get parties, nation-states, to take the sincere steps needed to address the climate chaos we are seeing across the globe,” said Dallas Goldtooth, a Keep It In The Ground Campaign Organizer for the Indigenous Environmental Network.

He and other Native American environmental activists criticized the Paris Climate agreement and the COP23 conference for emphasizing carbon pricing, including carbon taxes, carbon credits, and carbon trading, rather than focusing on reducing overall fossil fuel consumption. Earlier in the week, they interrupted a speech by California Governor Jerry Brown because of his support for carbon mitigation as opposed to reducing oil drilling in the state.

“The It Takes Roots delegation put direct pressure on the California’s government at COP23 demanding that we move away from the false solution of carbon pricing that increases pollution at the source and violates indigenous sovereignty,” said Daniel Ilario of Idle No More, a protest movement that began in Canada.

“During Governor Jerry Brown’s “We are still in” the Paris agreement speech, we stood up and demanded that California keep fossil fuels in the ground,” he continued. “His response, threatening to put us in the ground, illustrates that government representatives, funded by corporations, are willing to put our lives at risk to protect the colonial capitalist system.”

The activists also released a report at the end of the conference pushing back on carbon pricing. According to the report, carbon pricing does not actually solve the problem of pollution and is really a fraudulent attempt to mitigate climate change.

“Carbon taxes evidence the power of inequalities entrenched in carbon pricing. Using taxes, industries and governments, hand in hand with financial institutions, are able to shift costs, under-report pollution and gain profits while legitimizing business as usual,” read the report, which was released by the Climate Justice Alliance and the Indigenous Environmental Network. “Carbon tax schemes do not address the tax structures that allow corporations to shift impacts to communities (section 4). The revenue generated from a carbon tax is rarely much more than a pittance or a bribe for communities impacted by corporate destruction.”

The report stressed how global warming and air pollution disproportionately impacted impoverished and minority communities and rejected the carbon tax model as easily exploitable. However, it did not offer alternative solutions for global energy needs.

Speaking at a press conference on Friday, the Native American environmental activists were also disappointed in the small role indigenous peoples were allowed to play in the climate conference. They see the campaign to halt climate change as linked to the human rights of indigenous peoples around the world.

The UN has agreed to allow indigenous participation at the next climate conference, COP24. However, the indigenous participants will have only an advisory role and will not be allowed to participate in negotiations or decision making. Still, this represents a rather significant concession on the part of the UN, since the majority of the voices leading the indigenous rights protests are American and the U.S. is no longer a party to the treaty.