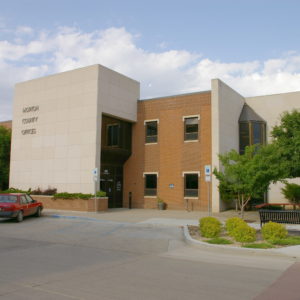 Last summer, protesters tried to stop the completion of the Dakota Access Pipeline by building sprawling protest camps on the North Dakota prairie to halt construction as they fought the company in court. As the protest stretched on for the better part of a year, hundreds were arrested in frequent clashes with police. During a period of heightened tension, arrested protesters flooded the local jail, swamping the law enforcement personnel available to process and book them, as well as the North Dakota Court system. Now the protesters are coming to trial, where many of these charges have resulted only in dismissed cases.

Protesters are taking the dropped and dismissed cases as a sign that police were abusing their authority during the protests last summer.

Speaking after he left the courthouse yesterday, rapper Aaron “Shawn” Turgeon, also known by his stage name “Prolific,” said he was grateful to the judge who had decided to dismiss the charges against him.

“It’s a call for other judges here in Morton County to understand that there might be things happening that you’re not seeing,” he said. “In my case, they tried to take my drone. If they would have taken my drone, I would not have video evidence that showed I never flew toward that plane.”

Turgeon had been charged with endangering a police plane by flying a remote control drone over the protest camp. Drawing on footage from the drone and from cell phones, the judge found that Turgeon’s actions had not put the pilot of the surveillance plane or the protesters below at substantial risk of bodily injury.

Turgeon’s case is one of dozens of cases to be dropped in recent weeks. On Thursday, a judge acquitted Alex “Distance” Wilson midway through her jury trial. Wilson had been charged with disorderly conduct and disobeying a public safety order under riot conditions, two misdemeanors.

Many of the dropped charges are trespass cases dismissed because, although protesters were on private property, no authority figure specifically requested that they leave. As a result, the cases were dismissed by the judge for insufficient evidence. Following two similar decisions before Judge Allan Schmalenberger, the Morton County State’s Attorney’s Office decided to drop some similar cases.

The trickle of dismissed cases has continued, growing to a steady stream. At the end of March, Morton County District Judge Schmalenberger dismissed cases against two protesters arrested for riot and trespass in October. Despite the dismissals, more than 80 other cases from the same October 22, 2016 mass arrest remain to be tried.

Last week, a federal judge also dismissed a civil suit by Dakota Access against several protesters, including Standing Rock Tribal Chairman Dave Archambault. The company had argued that protesters interfered with the pipeline’s construction, endangered the safety of its workers, and cost the company more than $75,000, the minimum for federal civil cases. In his ruling, U.S. District Court Judge Daniel Hovland decided against the company, writing that the company could not use the aggregate harm of the protest to calculate the value of an injunction against particular individuals.

The company may decide to pursue damages in state court, but the likelihood of its success is unknown.

Although the protest camps were closed months ago, the North Dakota courts are only now handling many of the cases. The protests resulted in hundreds of arrests, which swamped the North Dakota court system, delaying trials for months. In January, the state supreme court ruled that the situation was an “emergency affecting the legal system of North Dakota,” and decided to allow out-of-state attorneys to represent protesters, since the North Dakota’s public defender’s office was swamped.

Last summer, supporters of the protest used a crowdfunding site to raise more than $3 million for legal defense for arrested protesters. Since then, a group called the Water Protector Legal Defense Fund was created to manage the donations and to connect arrested protesters with attorneys who have volunteered to defend them pro bono. Although the group prioritizes “indigenous folks and those who are facing serious felony charges,” by late February, the group had already found legal counsel for 500 of the more than 800 protesters in need of counsel.

The fresh supply of lawyers gives them an edge on North Dakota’s public prosecutors, who have been struggling to keep up with the caseload.

Even while the charges are being dismissed, protesters have continued to accuse the state of North Dakota of attempting to coerce protesters.

“In an attempt to extract guilty pleas, the State is waiting to dismiss each case until the last minute before trial,” said Water Protector Legal Collective Attorney Jacob Reisberg, “which has created great hardship and uncertainty for many Water Protectors, particularly those living out-of-state who have to book travel to any appearances.”

The dismissed charges show the limits of trying to legislate out of a problem like the protests. In the waning days of the Standing Rock protest camps, lawmakers in Bismarck discussed several bills to criminalize techniques used by the protesters, including protesting on “environmentally sensitive areas” and a law protecting drivers who accidentally struck protesters from criminal prosecution.

Although the first law, which would have allowed law enforcement officers to impose a $5,000 fine on anyone refusing to leave environmentally sensitive areas after a law enforcement order, failed to pass the state legislature, the second did. The on-going series of protest-related cases shows that such laws have questionable effectiveness.

North Dakota state officials have not spoken about the dismissed charges. Protesters, however, are taking them as a sign of victory.

“Oil may be flowing under Lake Oahe, but the arc of the moral universe still bends toward justice,” concludes one blog post from the Water Protector Legal Collective, a group providing legal defense and bail for arrested protesters.

“Water protectors are winning the fight against the head of the “black snake” in the courts, and this Movement has inspired so many to continue this fight elsewhere,” it continued. “These are still sacred times.”