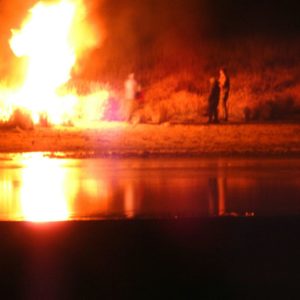 On Tuesday, members of the National Sheriffs’ Association met with President Donald Trump to ask for assistance in closing the protest camps. Despite repeated calls for closure, a small band of defiant protesters remains on site. The sheriffs requested help from Customs and Border Patrol, the U.S. Marshals, the Drug Enforcement Administration, and the Bureau of Alcohol, Tobacco and Firearms. They also wanted a stronger response from the Bureau of Indian Affairs.

The location of the protests complicates police jurisdiction. The drill site itself is on land owned by the Army Corps of Engineers as part of the Lake Oahe reservoir. However, the Standing Rock reservation itself falls under the jurisdiction of the Bureau of Indian Affairs.

Sheriff Paul Laney of Cass County, North Dakota told reporters afterwards that some protesters were fleeing police by crossing into the reservation.

“We’re county personnel, we can’t go in there,” he said.

“We hopefully will see federal agents helping police,” he continued.

It is unclear how many of these federal agencies will be able or willing to help. However, North Dakota law enforcement has an ally in Acting Assistant Secretary for Indian Affairs Michael Black, who has called closing the camps a matter of public health and safety.

“North Dakota Gov. [Doug] Burgum, the Standing Rock Sioux Tribe leadership, local law enforcement, and local landowners have all warned the public and those still camped of the dangerous spring flooding expected due to the heavy amount of snowfall the state received this winter,” Black said.

Despite repeated requests from the state’s congressional delegation and then-Gov. Jack Dalrymple, the Obama administration offered little manpower and no funding to help cover the increased policing costs. Since ordering the Army Corps of Engineers to grant the easement, the Trump administration has sent additional BIA agents to the site, bringing the total number from 20 to 40.

Black said that the agents were sent as “enforcement support” in order to assist the tribe in closing the protest camps. The Standing Rock tribe has previously urged the protesters to pack up their camps and leave.

Although the help is welcome, concerns about law enforcement costs remain. Providing round-the-clock police coverage for the camps has put a drain on state finances and forced the state to repeatedly draw on its emergency funds. North Dakota’s legislature voted several times to allow the state to borrow additional money to cover the expense. The first piece of legislation signed by Gov. Bergum authorized the state Department of Emergency Services to borrow up to an additional $8 million to help defray law enforcement costs.

Additionally, the increased federal presence has caused concern with tribal leaders who fear that agents may overstep their authority. In late January, newly-inaugurated North Dakota Gov. Bergum met with tribal and camp leaders to discuss their concerns over the potential use of force by federal agents.

Archambault says he told Bergum that “if the president wants to use federal force, to let us know. We don’t want anyone to be hurt. That’s the nerve-wracking part, because [Trump]’s making rash decisions.”

Bergum said later that the two sides did not reach any agreements, but both sides took the meeting as a sign of good faith.