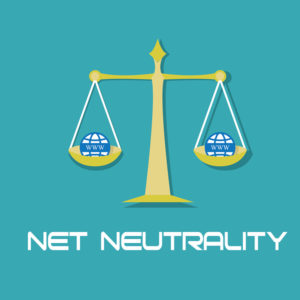 Posted to Technology May 04, 2017 by Giuseppe Macri

When Republican Federal Communications Commission Chairman Ajit Pai announced his plan to scale back Obama-era net neutrality rules in April, Democrats speculated the plan could run afoul of the law. Net neutrality supporters celebrated again when a federal appeals court upheld the rules for the second time last week, but a careful reading of the decision could be interpreted to put the law on Pai’s side.

The new chairman’s plan to roll back the 2015 Open Internet Order can be summed up in three parts. First, it reverses the order’s reclassification of internet service providers (ISPs) like AT&T as “common carriers” or public utilities under Title II of the Communications Act (authority originally created to break up the Bell telephone monopoly, and give the FCC the potential power to regulate prices). Second, it eliminates the internet conduct standard that grants the agency general power to police practices by ISPs the agency deems unfair (the previous administration used it to go after zero-rating deals).  Third, it seeks comment on what to do with the three core net neutrality rules against web traffic throttling, blocking, and making paid prioritization deals with edge providers like Netflix.

Pai’s ultimate goal is to reclassify broadband as a Title I information service and return oversight to the Federal Trade Commission’s lighter-touch jurisdiction, where it resided from the Clinton administration until 2015.

Democrats and other supporters of the rules immediately cried foul, saying any reversal of the rules could be illegal.

“Any effort to roll back in draconian fashion this kind of rule would be potentially against the law,” Connecticut Sen. Richard Blumenthal said. “They’re going to have to present evidence, and that’s going to be quite a hurdle because the evidence all points in the opposite direction.”

That’s due to agency stipulations that require the FCC to show a significant change has occurred in the market to justify the change in policy, which would be difficult to demonstrate given the rules have only been on the books for two years. Coupled with that is the large docket of public comments the previous FCC received — more than four million weighed in on the proceeding, the majority in support of net neutrality.

Then, on Monday, the D.C. Circuit Court of Appeals upheld the decision of a three-judge panel declaring the rules legal, declining a request by ISPs to bring the case before all of its judges for review. Net neutrality supporters described the ruling as a win, with groups like Public Knowledge affirming the case proves “Open Internet rules are lawful and supported by the evidence.”

But as Pai himself pointed out, the case wasn’t decided on the merits of net neutrality or any FCC description of market changes.

“In light of the fact that the commission on May 18 will begin the process of repealing the FCC’s Title II regulations, it is not surprising, as Judges Srinivasan and Tatel pointed out, that the D.C. Circuit would decide not to grant the petitions for rehearing en banc,” Pai said Monday. “Their opinion is important going forward, however, because it makes clear that the FCC has the authority to classify broadband internet access service as an information service, as I have proposed to do.”

Srinivasan and Tatel were two of the judges that heard the original case and wrote Monday’s decision, the first part of which says the review would be particularly unwarranted at this point in light of the uncertainty surrounding the fate of the FCC’s Order.”

“The agency will soon consider adopting a Notice of Proposed Rulemaking that would replace the existing rule with a markedly different one,” they wrote.

The judges go on to say the case was decided based on “Chevron deference,” a doctrine upheld by the Supreme Court “that requires judges to defer to administrative agencies’ interpretations of federal law in most cases where the law may be ‘ambiguous’ and the agency’s position seems ‘reasonable,'” according to Ilya Somin, a law professor at George Mason University.

“[T]he question posed by the doctrine is whether the FCC has clear congressional authorization to issue the rule,” Monday’s decision reads. “The answer is yes. Indeed, we know Congress vested the agency with authority to impose obligations like the ones instituted by the Order because the Supreme Court has specifically told us so.”

Srinivasan and Tatel cited another case in which the FCC decided to classify cable broadband as an information service, despite having already classified DSL broadband as a common carrier service.

“Critically for our purposes, though, the Court made clear in its decision—over and over—that the Act left the matter to the agency’s discretion,” they wrote. “In other words, the FCC could elect to treat broadband ISPs as common carriers (as it had done with DSL providers), but the agency did not have to do so.”

As Pai noted, the ruling appears to back up Pai’s case to reclassify ISPs as information services.

“In that light, the proper classification of broadband service would turn “on the factual particulars of how Internet technology works and how it is provided, questions Chevron leaves to the Commission to resolve in the first instance,” the judges continued. “But deference equally would have been owed, the Supreme Court made clear, if the FCC had reached the opposite resolution by classifying cable broadband providers as telecommunications carriers.”

Szoka said the “courts ought not grant normal Chevron deference to the agency” and indicated the group, which fought the rules alongside ISPs, will appeal the case to the Supreme Court. As Professor Somin pointed out in a Washington Post op-ed, the Supreme Court’s newest judge, Justice Neil Gorsuch, opposed Chevron, as does Justice Clarence Thomas.

“Several Justices across the political spectrum have declined to apply Chevron on ‘major questions’ like this one,” Szoka said. “Chief Justice Roberts upheld Obamacare despite finding that Chevron did not apply. And all four Justices on the left joined in the part of the Court’s 2014 decision in Utility Air Regulatory Group striking down the EPA’s attempt to effectively rewrite its statute. Another trans-ideological coalition could well block the FCC’s overreach.”