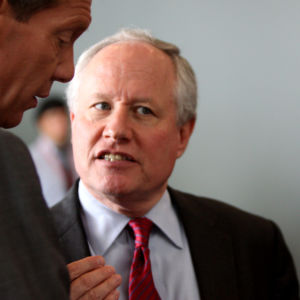 GOP-leaning independent voters in New Hampshire are receiving phone calls and texts from anti-Trump Republicans urging them to cross the aisle and vote in the Democratic primary on Tuesday, NHJournal has learned. The message is for these unaffiliated voters, who can vote in either party’s primary, to vote for a “responsible and electable” Democratic alternative to Donald Trump.

National #NeverTrump leader Bill Kristol, founder of the conservative Weekly Standard magazine, confirmed to NHJournal that he is part of the effort, which involves tens of thousands of New Hampshire voter contacts and a six-figure budget.

“Yup. I’m happy to have joined with some others to help remind New Hampshire independents, who might be accustomed to voting in the Republican primary, that this year, they may be able to make more of a difference by voting for a responsible and electable candidate in the Democratic primary,” Kristol said.

The calls don’t mention any candidates by name or endorse any specific Democrats, instead making a case for supporting centrists in the all-important First in the Nation primary, as opposed to self-described democratic socialist Sen. Bernie Sanders. The latest RealClearPolitics poll average gives Sanders a six-point lead in the Granite State.

While the competitive, multi-candidate Democratic primary is getting the vast majority of media attention, there is a GOP primary on Tuesday as well. Former Massachusetts Gov. Bill Weld is currently campaigning in New Hampshire, while former Illinois Rep. Joe Walsh has suspended his candidacy in the wake of a disappointing performance in the Iowa Caucus.

“I admire what Bill Weld is doing, and hope he gets as many Republican votes in the New Hampshire primary as possible,” Kristol said. “But if you’re a New Hampshire independent, and if you don’t want the nation to be subject to a Trump/Sanders choice, I suspect you can make the most difference by voting for a reasonable Democrat of your choice in the Democratic primary.”

“Trump is over 80 percent in the New Hampshire primary and might be closer to 90 percent by Election Day,” said Spencer Kimball, Director of Emerson College polling. “If that holds, it would be an overwhelming victory and be the end of the Weld candidacy. If Weld can break 30 percent that would create some legitimacy like McCarthy in ’68 against Johnson, or Buchanan in ’92 v. Bush. But I don’t see that happening based on the campaign operations I have seen on the ground this year by the Weld campaign.”

Team Trump says they’re not worried. “This failed magazine editor is wasting his time if he really thinks his resistance agenda is a better choice for Granite Staters than a president who has delivered more jobs and more money for New Hampshire families,” Trump Victory Spokesperson Dain Pascocello told NHJournal.

“Bill Kristol used to be a conservative, now he falls much more in line with the socialists that he supports — whether it’s Bernie Sanders or Elizabeth Warren,” said New Hampshire-based Trump 2020 campaign strategist Corey Lewandowski. “He is out of touch with the fact that Donald Trump has delivered for the American people. I guess Bill must hate the notion of ‘America First,’ the same way so many of the Democrats do. He’s welcome to move to a Socialist country — but he won’t because he’s all talk and no action.”

Kristol’s response? “Typical disinformation from the Trump apparatchiks. We’re trying to save the nation from a choice between Trumpism and socialism.”

State Rep. Fred Doucette, co-chair of Trump’s Granite State campaign, says he’s not surprised by this #NeverTrump effort. “They are going to pull out all the stops at the 11th hour in a failed effort to stop Trump and bolster any candidate at this point. But the voters of New Hampshire can sniff out B.S. from a mile away.”

As for Trump’s chances in New Hampshire in the fall, Doucette says the president’s support among independents is stronger than polls show. “Not everyone is going to put a lawn sign in front of their house or a bumper sticker on their car for Trump, but when they get in their voting booth and mark that ballot, the thriving economy will speak for itself.”

Kristol believes that moderate Republican voters will appreciate having a choice in November, and that the first step is to keep alternatives to Sen. Bernie Sanders viable after New Hampshire votes.  He denies that this effort is an attempt to game the Granite State primary.

“We’re not asking people to vote for candidates they don’t like in order to mess up the other party, as some Trump operatives are doing when they tell people to vote for Sanders,” Kristol said. “We’re reminding conscientious Americans who want a good alternative to Donald Trump that they can help increase the chances of having such an alternative in November by participating in the Democratic nominating contest over the next weeks and months.”