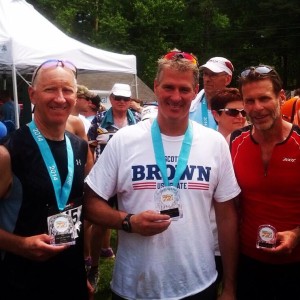 What can candidate tweets tell us about a candidate's personality? Here, Scott Brown poses with other triathletes at the Greater Nashua Triathlon (photo via Twitter).

Just recently, the filing deadline for all candidates passed, and we now know who will be on the ballot across New Hampshire for this fall’s elections. On the top of the ticket, U.S. Senator Jeanne Shaheen will run unopposed in the Democratic primary, while a crowded field of ten candidates will compete for the Republican nomination and the chance to face Senator Shaheen with major party support. At the head of the Republican pack lie former US Senators Bob Smith and Scott Brown, and former state Senator Jim Rubens.

Primary elections often involve candidates who share considerable agreement on major policy objectives. As a result, debates within primaries frequently revolve around which candidate is the most authentic, trustworthy, hard-working, and likeable, as primary candidates seek to find even minor instances where their opponents acted against party orthodoxy. Personality traits pick up many of these character differences which seem to be particularly important in primary elections in the absence of intense ideological competition.

Recent work I have done (with my co-authors Adam Ramey and Gary Hollibaugh) has used the social media accounts and speeches of members of Congress to measure the personalities of politicians in an objective way. This technique can take text produced by multiple people and apply a personality recognizer algorithm that results in a ranking of those people on what psychologists call the Big Five personality traits. These traits, Openness to Experience, Conscientiousness, Extraversion, Agreeableness, and Emotional Stability, have been found to capture much of what separates individual personalities from one another over the course of 25 years of research.

The personality recognizer allows us to draw from the public statements (in this case the Twitter accounts) of the best-known Republican candidates for New Hampshire’s US Senate seat, and examine how the candidates’ personality differences may help or hurt them in their quest to win their party’s nomination. While the text analysis I draw upon here is a very useful tool, it does have flaws, and those who know all the individuals involved would likely be able to observe qualities that the automated technique would miss. It is also important to note that most candidates hire speechwriters or press secretaries to manage their social media presence, but as these individuals are entrusted with the public voice of the candidate, the choice of speechwriters itself reflects what the candidate prefers to say and how he seeks to represent himself. With these caveats in mind, we can make some claims about how the top candidates stand out on personality traits that likely matter to New Hampshire GOP voters.

Over the past ten years, researchers working on personality in politics have identified some patterns in the personalities of liberal and conservative voters in the US. Liberal voters generally tend to have higher scores on the Openness to Experience and Agreeableness traits, while conservative voters in the aggregate are more conscientious and extroverted than liberals. If we make the assumption that conservative voters would prefer candidates similar to them, that is, a more conscientious and extroverted candidate to one who exhibits those traits less strongly and holds the same policy positions, we can get some leverage on how candidate personality might influence primary voters.

When the personality recognizer gets a good look at the three candidates’ campaign Twitter accounts, it finds that Bob Smith and Jim Rubens are quite similar in their levels of Extraversion, but Scott Brown is significantly more extraverted than either of them. Interestingly, Senator Shaheen is also much more extroverted than Smith and Rubens, around the same level as Brown. While more extraverted individuals are known best for being more talkative and social than less extraverted people, they also tend to be more active in general. This is likely a result of the fact that extraverts tend to hold positive beliefs about what will happen to them, even in the face of contrary evidence. This often allows extraverts to reach high levels of achievement through persistent application of effort, but often leads to overconfidence and failure. If Republican primary voters place as high a value on positive thinking, assertiveness, and gregariousness as past research suggests, Scott Brown may hold an edge over his rivals in this area.

The personality trait of Conscientiousness often is referred to as reflecting character, but this can be somewhat misleading. To be more precise, when conscientiousness is referred to here, it refers to an individual’s self-discipline and willingness to plan tasks and work hard for rewards in the distant future. The personality recognizer finds that among the three Republican candidates, former senators Bob Smith and Scott Brown are just about equally conscientious, and Jim Rubens is somewhat less conscientious than the two of them. For the sake of comparison, Senator Shaheen lies somewhere between Rubens and the pair of Smith and Brown. As more conservative voters appear to particularly prefer candidates who exhibit the conscientiousness trait, this would appear to put Jim Rubens at something of a disadvantage.

Finally, while there is evidence that more conservative voters exhibit higher levels on the Emotional Stability trait, other research suggests that both liberal and conservative candidates make a strong effort to portray themselves as emotionally stable. While politicians often focus on the traits exhibited strongly by their own parties, emotional stability appears to have across the board appeal. Given that emotionally stable people are said to be calmer, less likely to be stressed or rattled, and more even-tempered, this trait would appear to be valuable for any leadership role. The personality recognizer finds that Rubens, Smith and Brown are all fairly close to one another, with Brown somewhat more emotionally stable than Rubens, who is somewhat more emotionally stable than Smith. Notably, all three show greater emotional-stability traits based on their speech than Jeanne Shaheen. This seems to indicate that no candidate has a strong advantage on the basis of emotional stability for the primary election, but any winner would have an edge on Senator Shaheen in the general election.

The insights provided by the personality recognizer here suggests that there are some underlying personality differences between the three leading Republican candidates for the nomination, as well as differences between them and their Democratic opponent. Scott Brown built something of a legend around his personality in Massachussetts against Martha Coakley, and the personality recognizer suggests that he has some considerable advantages in the primary election in 2014. The words that candidates allow to represent themselves in public likely do not reach most primary voters. However, these choices likely reflect more subtle and persistent signals of their personality that voters do observe with every soundbite, news clip, and hand shake. In the end, if primary voters perceive that the candidates have few policy differences between them and Brown is able to exhibit his personality advantages to the Granite State Republican electorate, he may be hard to beat for the nomination.