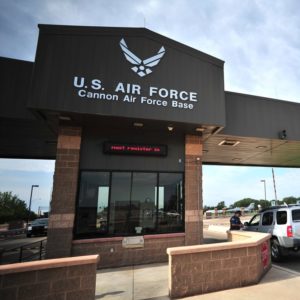 A year ago, Clovis County dairy farmer Art Schaap learned that his New Mexico business — and possibly his family’s health — were at high risk due to fire-fighting chemicals leaked from nearby Cannon Air Force Base into the groundwater on his farm.

These chemicals, called PFAS, leached into 13 wells at his Highland Dairy and his doctor has since told Schaap he might have suffered some kidney damage from the plume that is seething in the water below his farm, he said.

“I can’t sell my milk and I’m dumping more than 12,00 gallons a day. I can’t sell my cows, and I’ve got cows dying at my place,” Schaap told InsideSources. “We’re kind of in limbo right now. The government hasn’t made a decision on what they want to do. If they want to buy the cows or they want me to kill them or what.

“What makes me upset is that me and my family and my animals have been exposed, we don’t know how long, we’re assuming the last 10 years — and it could be longer,” he said. “They’ve been using this product for 40 or 50 years… they knew they had pollution here in Cannon [Air Force Base].”

PFAS — or per- and polyfluoroalkyl substances — are a class of toxic chemicals that can move through groundwater and into the food chain. The chemicals can increase serious cancer risk, affect children’s growth and learning abilities, and interfere with a person’s immune system. They’re sometimes referred to as “forever chemicals” because the molecular bonds that form them can take thousands of years to degrade.

To try and mitigate Schaap’s problems — and those of others suffering from similar issues — New Mexico filed a preliminary injunction in federal court last week for the Air Force to provide emergency relief from contamination that resulted from firefighting foam containing PFAS that seeped into the ground, on and near the state’s Holloman Air Force and Cannon Air Force bases.

And it’s not just New Mexico. A 2018 Department of Defense report identified “401 installations with known or potential releases of these [fire-fighting] chemicals.”

“I am extremely frustrated that the Air Force has not been responsive to protecting the health and safety of New Mexican families by addressing years of environmental pollution,” said Attorney General Hector Balderas upon filing the injunction. “Because of their delay and failure to act, [Environment Department] Secretary [James] Kenney and I are asking the Court to ensure timely protection of New Mexico’s people, wildlife, and environment from this ongoing and devastating pollution.”

The state wants the Air Force to immediately conduct regular groundwater and surface water samplings. The preliminary injunction also calls on the military branch to provide alternative water sources and water treatment options to New Mexicans affected by the contamination; conduct voluntary blood tests for residents who may have been exposed to PFAS; and deliver additional documentation on the extent of contamination around the bases.

“We will not allow this contamination to further threaten New Mexican’s health and the environment,” said New Mexico Environment Department (NMED) Secretary James Kenney. “In the absence of responsible and timely action on the part of the Air Force, the state will continue to seek whatever legal avenues available to compel clean up.”

The NMED and the state’s attorney general first sued the Air Force in April. As part of the new legal action, the two state agencies also filed an amended version of the original complaint to reflect violations of the federal Resource Conservation Recovery Act “pursuant to authorities granted to New Mexico” by the U.S. Environmental Protection Agency (EPA). These claims are in addition to violations of the State’s Hazardous Waste Act.

As to the injunction, Schaap was skeptical:

“Well, they basically told them that six to eight months ago and they haven’t done anything,” he said. “We neighboring people who are basically affected by this PSAS, they were supplying us with bottled water in the beginning.

“And then we put in our own filters in our homes and they haven’t [the Air force] paid for any of those,” he said. “So they discontinued supplying us with bottled water… [and] basically they aren’t doing anything right now.”

Schaap said there was no current law banning water laden with the chemicals, “just an advisory: You shouldn’t drink this stuff.”

“That’s what makes me the most upset: Is that they exposed me and my family to this and my animals, because it wasn’t in a law… so they feel they are fine, so that’s the approach they’re taking.”