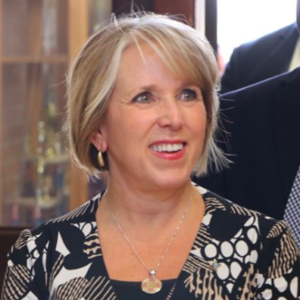 At a domestic terrorism summit in Santa Fe last week, New Mexico Gov. Michelle Lujan Grisham said “there are real threats in this country and the escalation of hate and extremism is alarming.” Lujan Grisham presided over the conference less than two weeks after mass shootings in El Paso, Texas, and Dayton, Ohio, killed 29 people within 24 hours. The summit was closed to the media.

After the talks — which included a briefing with FBI agents — the governor held a news conference with other attendees to reveal conclusions reached to protect citizens: the need for an anti-terrorism law enforcement unit; an expansion of the state’s mental health system; a toughening of hate-crime penalties; and improved data sharing between states and New Mexico communities of possible threats.

“We invited a number of leaders and stakeholders with expertise in areas of risk, threats, domestic terrorism and white supremacy to talk to political leaders from the House and the Senate [and] law enforcement experts… to have a strategic conversation about what we might do to protect New Mexicans,” Lujan Grisham said. “We are seeing increases [of violence] in this country that resulted, in fact, in the most horrific acts of domestic terrorism and loss of life that we have seen in recent memory.”

The governor said though the El Paso killer claimed he was looking to kill Mexicans — and New Mexico has the nation’s largest percentage of residents of Mexican descent — the Land of Enchantment isn’t experiencing any more hate crimes than other states.

“So there was nothing that we heard from any of our researchers that should give New Mexicans a sense that we are in more extreme danger than anyone else,” Lujan Grisham said. “But after saying that, there are real threats in this country and the escalation of hate and extremism is alarming.

“All states including New Mexico can and must do a better job in sharing data about hate groups.”

To achieve this goal, Lujan Grisham asked state Homeland Security and Emergency Management Secretary Jackie Lindsay to start registering the state’s 33 county sheriffs in a data-sharing program so that people believed to be a possible risk could be identified and scrutinized.

State Police Chief Tim Johnson said he found the summit “beneficial” in providing ways to identify those who might be capable of mass shootings and hate crimes.

“I think it’s obviously important for all of the citizens of New Mexico to be on the lookout for certain indicators of these types of folks that would do this,” he told InsideSources. “And part of our job as government officials is to ensure that the citizens of the community understand what those indicators are so they can report them.

Johnson said that it was “important for law enforcement and other social services to follow up” on reports of possibly dangerous citizens “in the hopes of preventing” acts of domestic terrorism.

Attorney General Hector Balderas focused on the need for higher penalties for hate crimes. Currently, under the state’s criminal code, a one-year extension can be added onto prison sentences for most convicted felons if their crime is proved to be inspired by the victim’s race, religion, age, gender or sexual orientation.

“I think we all recognize [that] the growing threat level deserves consideration,” Balderas said at the news conference. “If you have a very, very dangerous individual the penalties [should] at least be proportional to the amount of terror and potential harm for communities. So we have identified some areas in the statute that probably need to be looked at.”

“We should increase communication between federal, state, and local law enforcement agencies to share information on emerging threats within our communities,” Ezell said in a statement. “We also need to perform a thorough assessment of our behavioral health system. Too many people who pose a danger to themselves and others are falling through the cracks. We must do a better job of identifying them and getting them the services they need.

“We must develop smart solutions that get to the root causes of these incidents,” she said. “However we choose to proceed, the constitutional rights of law-abiding citizens must be protected.”

Lujan Grisham said a ban on assault weapons was not discussed at the summit, though gun-related legislation could be on next year’s legislative agenda, which begins in January.