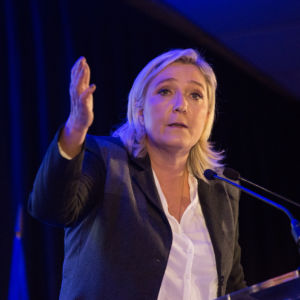 A month ahead of France’s upcoming presidential election, the media has identified an obvious winner, just as it did with “Stay” and Hillary Clinton. But a new poll released exclusively to InsideSources reveals yet another closely watched vote may take an unexpected turn. Marine Le Pen, the populist leader of the National Front, appears to be the beneficiary of a “hidden vote.”

The race in France has largely settled around Le Pen and ex-Socialist investment banker Emmanuel Macron, who is closely tied to the current president, François Hollande. Hollande suffers from abysmal approval ratings (one poll had his approval at just 4 percent). Macron is considered the most-likely victor by the media. Republican François Fillon may have been a top contender, but his campaign has become entangled in scandal after scandal. His support has been declining.

Macron is viewed as a continuation of an unpopular presidency at a time when the French are deeply skeptical of the European Union and gravely concerned about Muslim integration into French society following a string of devastating terror attacks. Le Pen is a nationalist who has praised Britain’s Brexit vote and wants to ban the full-body burkini swimsuits worn my Muslim women.

In a new poll released exclusively to InsideSources, Public Opinion Strategies, a leading U.S.-based polling firm, spoke with 530 likely voters via interactive voice response in France between March 11-17. (View the topline and analysis)

The race shows a three-way dead heat, with Fillon at 23 percent, Macron at 22 percent, and Le Pen at 17 percent. The margin of error is ±4.25 percent. There are eleven total candidates, and the top two will go on to a run-off. The poll reveals that Fillon has the most support from the right and the most support from those very interested in the election, but the survey was conducted just as news was emerging about an indictment of Fillon on embezzlement charges.

There may be an underlying trend that doesn’t show up in most polls.  Public Opinion Strategies asked voters who they believed their friends and neighbors are supporting, and voters revealed Le Pen was their choice. Macron finds himself significantly trailing both his rivals on this question.

Public Opinion Strategies’ Gene Ulm, who conducted the poll, tells InsideSources the polling definitely shows a hidden vote favoring Le Pen, and he explains that she can expect to make gains in the eastern portion of the country, similar to areas that supported her father, who also ran for president, advancing to the runoff in the 2002 election.

Ulm was asked about possible comparisons between the French race, the Brexit vote, and the U.S. presidential election. “We’re in a similar situation where there is a huge disconnect between the elites of the country and the general population. The elites and media are saying it’s impossible for Le Pen to win,” explains Ulm, but they also said Britain wouldn’t leave the E.U. and Donald Trump would never be president.

“I’m not saying she’s going to win, but Le Pen has a path and it could be amazingly close,” says Ulm.

While the Public Opinion Strategies poll was conducted via automated phone calls, as with the U.S. election, Ulm points out that Le Pen performs much better in online polling, where there may be less perceived social pressure to oppose a controversial candidate. An online Harris Interactive poll conducted this week showed Le Pen in a dead heat with Macron as Fillon slipped.

Ulm cautions against looking ahead to who people say they will support in the runoff, and that is likely to prove wise. Writing in the New York Times this week, Matthew Goodwin, a scholar who has followed right-wing movements, explains of Le Pen’s strategy, “According to her team, Ms. Le Pen expects to win a plurality and eliminate lesser rivals in Round 1 by sweeping up protest votes. For the head-to-head contest in Round 2, however, she will focus relentlessly on Mr. Macron’s privileged background and his close ties to the departing president, François Hollande, who has historically low approval ratings.”

He continues: “Ms. Le Pen’s team hopes that Mr. Macron’s economic liberalism will encourage traditional left-wingers either to abstain or back her own protectionist message, which is wrapped in the theme of national preference, the idea of putting native French workers first and introducing additional taxes on contracts for foreign employees.”

The Public Opinion Strategies poll also shows 71 percent of voters believe their country is on the wrong track, a sure boost to Le Pen.

The election will take place on April 23, with the run-off election being held May 7.