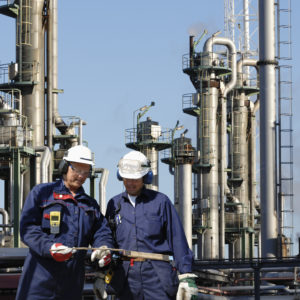 America’s oil industry has been the talk of the world. After decades as a net-oil importer, the U.S. quickly shifted to an energy exporting powerhouse after innovations in fracking allowed for the development of shale fields that were previously unexploitable. The result for consumers was obvious: gas prices dropped quickly. However, one bottleneck between lower oil prices and lower prices remained, namely a stagnant refining market. That is poised to change, though, with several new refineries planned in different states, a sign that the industry believes higher American production is here to stay.

On Wednesday, the North Dakota Department of Health Air Quality Division issued a construction permit for the Davis Refinery, which will be constructed outside of Dickinson, North Dakota by Meridian Energy Group.

“Meridian’s design efforts, which included modifications and improvements made as a result of their rigorous review, have ensured that the Davis Refinery will operate in full compliance with the law, and in a manner that is responsive to the concerns of the local community. The Davis Refinery will indeed be the cleanest refinery on the planet when completed,” said CEO William Prentice after the permit was granted, which marked the end of an 18-month-long approval process.

When completed, the Meridian refinery will have a production capacity of 49,500 bpd, though the project still needs to obtain a state water quality permit and faces potential appeals from environmental groups. Even so, the announcement is a sign of how America’s energy industry is permanently changing because of the impact of fracking and the light sweet crude it produces.

Large refineries are designed to handle a variety of types of crude oil, each with varying chemical makeups. As a result, even as the U.S. was beginning to export light sweet crude to the rest of the world, it was still bringing in heavy sour crude, which has a higher sulfur content from Venezuela, Saudi Arabia, and other countries to keep the refineries running.

“Truth be told, refiners didn’t reconfigure their equipment because they didn’t know how long the U.S. boom would last,” writes Chris Tomlinson, a business writer in Houston, who explains that refiners were worried that fracking couldn’t compete longterm and were worried about the costs of converting their equipment.

“As soon as prices inched above $50, oil companies announced they had learned how to make money at that price. They’ve doubled the number of rigs operating in the most lucrative oil basins from last year. Refiners are taking notice, recognizing that shale oil and gas are here to stay and finally investing in new facilities,” he continued.

Betting on fracking means that companies are beginning to build smaller facilities that can handle only a certain form of crude, rather than the large scale complexes that can handle a wide range of oils. True to form, the new refineries being built today are closer to shale fields than harbors or pipelines. Another refinery was approved near Fort Stockton, Texas in 2017, with construction slated to be completed in 2019.

Meanwhile, the largest refineries off of the Gulf Coast continued to expand and are currently producing hundreds of thousands of barrels each day, with the largest producing more than 500,000 bpd. These are the refineries with the sort of technical capacity to handle oil from many places.

This shift towards centralized refining production means that much of America’s refining capacity is centered around the Gulf Coast, where hurricanes routinely force periodic closures. Instead of building new large-scale refineries, companies have renovated and expanded their existing facilities. Five out of the fifteen largest refineries in the world are based in Texas and Louisiana.

Building refineries just for light sweet American crude means that the industry believes in the long term health of domestic production and that domestic drilling will be able to provide them with raw materials for years to come. Other refineries are planned near the Eagle Fold Shale in east Texas and in Pecos County, in western Texas.

All of this should be encouraging news for drivers hoping for lower fuel costs in the years ahead.