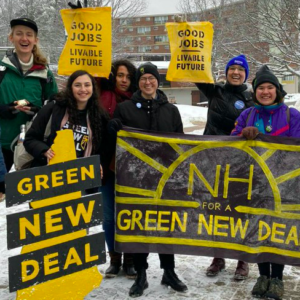 The Competitive Enterprise Institute, Power the Future, and the Wisconsin Institute for Law and Liberty analyzed implementation costs in 11 states, including New Hampshire, and found that it would cost the average household more than $75,000 in the first year and more than $40,000 each year thereafter. In New Hampshire, the first-year costs would exceed the median household income.

“The Green New Deal would effectively destroy America’s energy industry, and with it, our entire economy,” said Daniel Turner, executive director of Power the Future.

However, the sponsors did not include a price tag in their GND proposal and determining its true cost has been elusive. Various organizations from across the political spectrum have attempted to determine the total cost by breaking down its components.

For example, expanding renewable energy to provide 100 percent of the country’s power grid would cost upwards of $200 billion a year for 10 years, according to physicist Christopher Clark. Upgrading every house and industrial building for energy efficiency would run about $10,000 per structure for a total of nearly $1.4 trillion, according to several estimates.

The Green New Deal for Public Housing Act introduced by Cortez and Democratic presidential candidate U.S. Sen. Bernie Sanders (I-VT) — which would put organic groceries and onsite childcare into every public housing community — would cost between $119 billion and $172 billion over a decade. That plan also calls for giving a free bicycle to every resident.

Electrifying the United States, though, is more complicated than halting investments and productions of fossil fuels and adding a few power lines. To eliminate carbon emissions, America would need to produce twice as much electricity as it does today, which would require the construction of additional — and expensive — infrastructure. For example, a study for the Brattle Group found that while New England has been adding about 280 megawatts of energy from renewable sources per year, to eliminate carbon from energy production by 2050, that number would need to increase by 2,400 percent every year.

An addendum to the report looked specifically at the cost of the Green New Deal to Wisconsin’s agricultural sector, which employs 11.8 percent of the state’s workers. Author Will Flanders, research director at the Wisconsin Institute for Law and Liberty, noted that the GND’s “architects set a goal to get to net-zero, rather than zero emissions, in 10 years because we aren’t sure that we’ll be able to fully get rid of farting cows and airplanes that fast.”

Farmers would have to pay $2,000 per cow to offset the bovines’ carbon dioxide emissions, according to economist William Nordhaus. “This could lead to mass closures of small farms in an industry that is already struggling,” Flanders wrote.

In New Hampshire, the effects would be just as devastating says Shawn Jasper, the Granite State’s agriculture commissioner. “You’d put everybody out of business,” he told NHJournal. “There wouldn’t be a cow left in New Hampshire.”

The CEI-led study found that the transition to the GND would cost households in its 11 target states $2.7 trillion. Although costs would decrease after the first year of implementation and then again after year five, households would still be on the hook for tens of thousands of dollars each year.

“It’s a shame this study didn’t come out before the New Hampshire primary, which was won by a candidate who promised to implement the Green New Deal if elected president,” said Andrew Cline, Executive Director of the Josiah Bartlett Center, a free-market think tank in the Granite State. “The median household income in our state is a few hundred dollars less than what this study estimates to be the Green New Deal’s per-household cost in New Hampshire in its first year. It would’ve been fun to see a voter ask about that.”

“The Green New Deal is a politically motivated policy that will saddle households with exorbitant costs and wreck our economy,” said CEI President Kent Lassman. “Our analysis shows that, if implemented, the Green New Deal would cost… American households at least tens of thousands of dollars annually on a permanent basis. Perhaps that’s why exactly zero Senate Democrats, including the resolution’s 12 co-sponsors, voted for the Green New Deal when they had the chance.”

For a state like New Hampshire, where the fifth-highest electricity prices in the country are already driving away some businesses, the real costs of pursuing GND climate policies could be significant.

“New Hampshire’s portion of the bill comes to more than half of the state’s entire GDP, and that’s excluding the non-energy workplace regulations contained in the Green New Deal,” Cline said. “Clearly, New Hampshire can’t afford this preposterous scheme.”