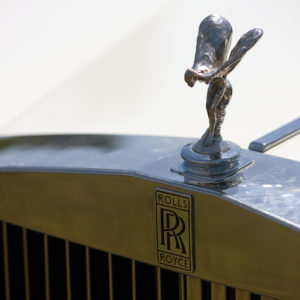 A New Rolls-Royce, Just in Time for the Holidays

Rolls-Royce Motor Cars has a new Phantom on the market. It’s just the eighth model with that marque to be produced since Henry Royce himself designed the car way back in 1925. It has been the top of the Rolls line ever since. The big, beautiful one: a land yacht of a car.

Once a “Roller” was somehow able to signal prudence as well as wealth. After World War II, when Britain was getting back on its feet, the big cars (usually black in color) pulled up at Claridge’s, The Connaught, The Dorchester, The Savoy, or one of the other great London hotels, and declaimed Britain’s returning health, quietly suggesting “Britain is back.”

In Hollywood, they signaled status. When they pulled into the Beverly Hills or the Beverly Wilshire hotels, the message was not subdued. It shouted, “I am someone in this town!” There were cheaters, of course: Those who rented a Rolls for a premiere or some other must-be-seen-at event.

Things went somewhat off the rails when the newly minted plutocrats of the Middle East took to treating the great cars as though they were no more than Volkswagen Beetles, sometimes just abandoning them in the desert as a new toy came along.

Even in the days when a Rolls was intended to convey solidity as well as wealth, there were exceptions, like Nubar Gulbenkian, the heir to the original Middle East oil fortune. He broke from tradition and owned ostentatious yellow Rolls. In the Swinging Sixties, there were more colored Rolls — even a movie, “The Yellow Rolls Royce,” written by Terence Rattigan, starring Ingrid Berman and Rex Harrison.

To get the full Rolls effect, you want to be chauffeured and lounge in the back: It’s as big a tiny house in the Phantom.

Alexander Korda, the Hungarian-born British film producer and director, used to sit in the front next to his chauffeur. Upper-class London eyebrows were raised — but then he was in show business.

But the bucks-to-burn oil crowd of the ’70s didn’t really help the prestige quotient of the car. They became a sign of flamboyance and a target for social activists. Gauche vulgarians took over: oil sheiks and rock stars.

Owning a Rolls has its own challenges. People who own them and don’t have a driver to stay with the car when out and about — whether in Hollywood, New York or London — find the Roller is a liability. Do you entrust this mobile bank vault to a parking lot? People steal the famous hood ornament, Spirit of Ecstasy, as a challenge.

Well, if you still want to get into the 2018 Phantom VIII, you can get the ready-to-drive-away model, complete with 12 cylinders of thirsty power and, allegedly, the quietest ride ever in a car for about $435,000. That’s with sumptuous carpets, wonderful leather and wood to get you tree-hugging all over again. Also, it’s pretty fast for a car that weighs nearly 6,000 pounds. It’s regulated to 150 mph. But if you take the regulator off, you can get 186 mph out of it.

Yet there’s something sad, about this latest luxury-and-engineering extravaganza: It seems designed for another time.

BMW, which now owns Rolls-Royce Motor Cars, is about to launch a Rolls-Royce SUV and it may eclipse its sedans. It should claim the market for the fun-in-the-desert crowd as well as those from LA, who like to tool around the canyons east of Malibu.

Worse, the writing is on the wall for internal combustion engines in China (a big, new Rolls market), Britain, Germany and France, which have threatened to ban them by mid-century.

Budget note: You can get into a lesser Rolls, like the entry-level Silver Ghost, for half the price of the Phantom VIII. But if you want to signal that you have Trumpish wealth, a Rolls-Royce coupe Sweptail was custom-built for $13 million.

Just the car to go with the $92 million condo in New York.

I drive a Kia Soul. It cost $15,000 new and it does what the Rollers do: It goes from place to place, just like the Phantom VIII.