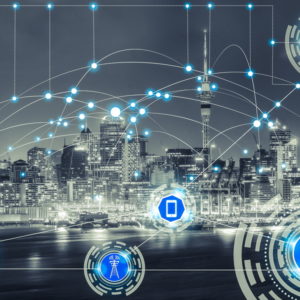 New Tech Bonanza Will Be the Digital Takeover of Cities

Benjamin Franklin was the first to deploy street lighting. He put candles in a four-sided, glass case for his lights. The engineering took a giant leap forward in England, when William Murdoch lit his home with coal gas lights in 1792.

Today street lighting is taken as a given, like waterborne sewage. But it’s also one of the building blocks for the cities of the future, known as “smart cities.”

In Bedford, Mass., a company called CIMCON Lighting has developed a controller node, which is the size and shape of a brioche loaf of bread and sits atop a light pole. The node isn’t big, but it packs a lot of functions beyond controlling the LED light. It’s Wi-Fi-equipped and is in constant wireless communications with its own network and with the city or county management structure. It has a camera, which can be used for crime control; more apps can be added.

By that measure the CIMCON Lighting device, or controller, is mighty talkative. The company calls it NearSky and says it enables “the internet of outdoor things.”

To me, it’s an outlier of things to come. Smart cities are the precursor to big changes in everything from transportation to entertainment, from food delivery to garbage control.

CIMCON Lighting believes its technology is a gateway to the smart cities concept that cities around the world are headed toward, some with accelerated political involvement.

In fact, the race to be smart is on and cities from San Antonio to London, and Boston to Singapore are already out of the blocks. It’s going to get giddy.

Old controllers on lights turn them on and off, and sometimes dim them. CIMCON Lighting and the new generation of controllers are little Napoleons, controlling everything they see and much that they don’t. The controller sitting modestly on a street light will be in the vanguard of the revolution that will encompass the whole city.

The electric utilities, the technology companies (like Google, Amazon and IBM) and the telephone giants (like AT&T, Verizon and T-Mobile) all are interested in seizing the lead in the new city space. Their interest goes way beyond things like street lighting to the very command-and-control of cities, from routine police dispatch to disaster management. The old-line companies are wary of what Amazon, Google and Facebook might do in the smart city space.

The telephone companies are hinging their participation on their 5G networks, which they are rolling out in fits and starts. The electric utilities believe they have something of a leg up because they’ve been working on making the electrical grid smart for a decade and that it’s now far-advanced with a lot of demand controlled by the customer, not the vendor: a smart city selling point.

Morgan O’Brien, a co-founder and chairman of Nextel Communications, and himself a giant in the telecommunications industry, says the current telephone standard, LTE (Long-Term Evolution), is strong enough to start the revolution and in due course 5G will fit in.

O’Brien is now vice chairman of pdvWireless, which has developed a private system for electric utilities’ communication with a dedicated spectrum to secure it. This has evolved from a suite of workplace wireless communications tools.

O’Brien told me he believes you must look to companies — possibly post-merger ones — which have the technology, capital and ambition to conquer the smart cities market to identify the likely movers and shakers. Of course, pdvWireless hopes to be in there, he said.

Retired Air Force Maj. Gen. Robert Wheeler describes 5G as a “huge pipe” that will have such capacity for communications and handling vast amounts of data that it’ll itself bring about a mini-revolution. Wheeler worked on getting and keeping the military up to speed on evolving digital technology.

There are more than 19,000 cities and counties that operate as cities in the United States, and more than 50,000 in the world. So the companies are salivating over a gigantic market, almost unimaginably tempting.