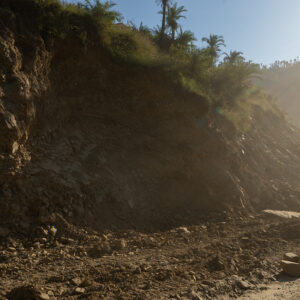 It’s that time of year on the West Coast when emergency managers prepare for a host of catastrophic weather events — everything from Pineapple Express systems that dump intense rains on the regions to the flooding and landslides that often follow.

Landslides are a near-constant threat to the safety of communities and infrastructure in this part of the U.S. Once an unstable slope gives away, the formed debris flow could travel at a speed exceeding 35 mph, leaving limited time to evacuate people along the flow path and often leading to devastating consequences. Some other landslides, though not evolving into deadly flows, result in constant damages to highways, houses and underground infrastructure.

In January 2005, a portion of a steep slope near La Conchita, Calif., failed and formed a rapid flow, taking approximately 20,000 dump trucks of materials downslope killing 10 and destroying dozens of houses.  In March 2014, a hillslope near Oso, Wash., collapsed sending millions of tons of mud and debris to a rural neighborhood within two minutes, killing 43 and devastating a community.

Near Los Angeles the slowly deforming Portuguese Bend landslides progressively slide into the Pacific Ocean, bringing with them hundreds of houses on the slope. On the southern coast of Oregon, the alternately slow and rapid Hooskanaden landslide constantly cracks and deforms Highway 101, costing at least $75,000 for road repair every year.

Across the United States, an average of 25 people are killed and $2 billion dollars worth of properties destroyed by landslides annually. Roughly two-thirds of them occur along the U.S. Coast.

A first step to reduce these devastating and costly landslide damages is to know where they are, before they evolve into an irreversible hazard. This very task was also called out by the recently enacted National Landslide Preparedness Act (Public Law 116-323), which advocates actions to identify landslide risks and reduce losses.

A very good demonstration of such efforts is published in the journal “Landslides.” Funded by NASA Interdisciplinary Research in Earth Science, NASA Earth Surface and

Interior Focus Area and USGS Landslide Hazards Program, the research team, from Southern Methodist University and USGS, utilized approximately 7,000 scenes of satellite radar images from 2007 to 2019, to map 600 large landslides in the Western U.S. Less than 5 percent of them were previously mapped in the USGS landslide inventory. Those landslides ranged in size from the equivalent of seven to 2,400 football fields.

These identified landslides are already in a state of force imbalance. External forces like earthquakes or rainfall could shift some of them into a disaster. Abnormal climate situations powered by climate change could also accelerate how quickly these landslides become catastrophic.

Using the interferometric synthetic aperture radar technology (called InSAR, for short) and satellite radar images, the researchers were able to detect changes that aren’t visible to the naked eye. This satellite technology can capture ground motion with a precision of sub-inches or better, at a spatial resolution of a few yards over thousands of miles.

Most of the large landslides identified were in the mountain ranges of western Washington, southwest Oregon, and northwest California. In some cases, the identified landslides were within 0.5 to 5 kilometers of multiple towns and roads. People who live, work or commute upon or near these landslides are exposed to their potential danger. Similarly vulnerable are public and private infrastructures such as pipelines, highways, houses, and underground constructions located on or near these landslides.

The research team provided an online tool to visualize the identified landslides and released a downloadable version of the data files via the USGS data repository. Both are freely accessible to the public. Although noting that many of these landslides do not pose imminent danger yet, the researchers urged western states policymakers to monitor the movement of the now-identified landslides so they can prevent a catastrophe.

The creation of this inventory has the potential to determine how the landscape on the West Coast will evolve in the coming decades in response to seismic activity, changes in rainfall patterns, and wildfires. However, immediate value is offered to particularly the Applied Science community in land use planning and hazard management.

Land use planners can refer to the mapped landslides to implement housing codes that restrict building in Landslide Danger Zones. Policymakers can use it to regulate sellers and real estate agents to disclose that a property is in a Landslide Zone. That is critical to homeowners because home insurance typically does not cover landslide damage.

Federal and state agencies and local governments can benefit from the new inventory during the practice of land management, to avoid unleashing an existing landslide threat. Land mismanagement nearby a destabilized landslide — such as clear-cutting, road construction, underground mining, and agricultural irrigation — are among common triggers for landslide disasters.

Residents can gain better awareness of the potential safety threats if living close to a now-identified landslide. Detailed studies by professionals involving engineering geological characterization and modeling can then be performed to accurately estimate and mitigate potential future hazards.

In the meantime, the research team has been pushing to turn these scientific discoveries into societal benefits. Potential end-users in private and public sectors — homeowners, environmental services and insurance companies, U.S. Forest Service,  Washington State Department of Natural Resources, Oregon Department of Geology and Mineral Industries, state Geological Surveys, Departments of Transportation and City Governments in Washington, Oregon, and California state — can help maximize the value of the new landslide inventory, to save lives and mitigate property damage.

Zhong Lu is a geophysics professor and Shuler-Foscue Chair at the Roy M. Huffington Department of Earth Sciences at SMU Dallas. He wrote this for InsideSources.com

Yuankun Xu, is a postdoctoral researcher who works in Lu’s SMU Radar Laboratory. He wrote this for InsideSources.com.