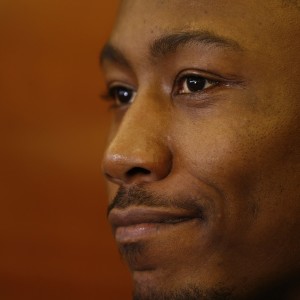 The 32-year-old sports star said the nation needs to do more to make treatment affordable and accessible, scaling up approaches that work in local communities across the country.

One key challenge he identified, which is the focus of his nonprofit Project 375, is the severe stigma associated with mental illness that often prevents Americans from getting the help they need.

“This is the last great stigma in our country,” Marshall said, describing the “living hell” of isolation and depression he experienced before his diagnosis in 2011. “It was hard to control my emotions and manage my life effectively, and the situation was only magnified by the tough-it-up culture of football.”

Republican and Democratic senators thanked Marshall for serving as a symbol of hope in his recovery, and some relayed stories of how mental health issues touched their own lives.

Sen. Ron Wyden, a Democrat from Oregon, said his brother Jeffrey struggled with schizophrenia for decades.

“Like so many families across the country, you went to bed at night constantly thinking that your loved one might, the next day, hurt themselves or somebody else,” the senator said.

Jeffrey Wyden died in the hospital in 2002, according to the Associated Press.

If Marshall was the star witness at Thursday’s hearing, the star lawmaker was Sen. Debbie Stabenow. The Michigan Democrat authored the Excellence in Mental Health Act with Sen. Roy Blunt, a Missouri Republican, and President Barack Obama signed the legislation into law in 2014.

Stabenow and Blunt are now pushing for increased funding and implementation of their law, specifically to expand “mental health planning grants” to more states.

Stabenow said there’s “wonderful bipartisan interest” in these issues in Congress at the moment, though she noted, “The last Finance Committee hearing on mental health was in 1999.”

Sen. Pat Roberts, a Kansas Republican, pledged his support for the cause after Marshall told lawmakers, “I’ve caught hundreds of passes during my career. Today, I’m throwing one, to you.”

“I still have good hands,” Roberts said. “I won’t fumble it.”