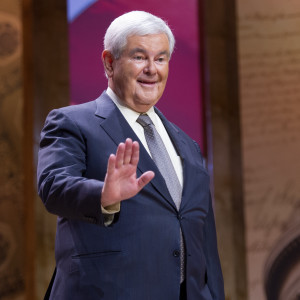 Republicans and Democrats may never agree on whether Newt Gingrich or Nancy Pelosi was the better speaker of the House, but you’ve gotta give the “Contract with America” author this much: he’s definitely the bigger Star Wars fan.

Gingrich’s passion for the galaxy far, far away is one of many delights in Ken Burns’ nerdalicious 2007 documentary Star Wars: the Legacy Revealed, a History Channel presentation that inexplicably features both former speakers doing film criticism of George Lucas’ movie franchise.

Ahead of the Star Wars: the Force Awakens premiere next week, InsideSources revisited this gem of a television special, preserved on YouTube, to explore literature, mythology, theology and history that inspired the blockbusters.

Pelosi’s contributions to this documentary, it must be said, are disappointing. The California Democrat’s big Star Wars takeaway seems to have been that “power always belongs to the people” — a bold declaration if ever there were — and that Lucas “broke new ground in terms of communicating a message.” Frankly, she sounds more like she’s handing out a Pollie Award than an Academy Award.

Gingrich, on the other hand, is in his element. The former history professor is clearly a fan.  (He’s celebrated Star Wars Day on Twitter and proposed building a real-life lunar colony for crying out loud.) In the documentary, he compares heroic Jedi Knights to Catholicism’s Jesuit order, discerns conservative moralizing in the films’ clear demarcation of good and evil, and even finds a Reagan era anti-communist angle on the Rebel Alliance’s fight with the Galactic Empire.

“Star Wars came along and it re-validated a core mythology — that there is good and evil, that evil has to be defeated,” he says. (He later adds that George Washington would find in the film “a great deal that he would have agreed with.”)

Living up to his reputation for grandiosity, Gingrich dubs the Jedi “truth-bearers who are the priesthood of freedom” — part of a diverse Rebel force reminiscent of the Western Bloc Cold War coalition: “There was a very broad coalition of people representing many different value systems and structures, but who had collectively concluded that they didn’t want a Soviet tyranny imposed on them.”

Other Legacy Revealed commentators see different politics in the movies.

Leon Wieseltier, the former literary editor of the liberal New Republic, says they’re all about “the resistance of the champions of diversity — and they’re not just ethnically various, they’ve zoologically various — against the enforcers of uniformity.”

The documentary also notes how some on the American left likened evil Darth Vader’s ominous statement “If you’re not with me, then you’re my enemy” to President George W. Bush’s post-9/11 declaration “Either you are with us or you are with the terrorists.”

Mercifully, the bulk of Burns’ interviews aren’t with overtly political people, and it’s fun to hear from out-and-proud Star Wars fans like comedian Stephen Colbert and Force Awakens director J.J. Abrams. Both of them remark on the relatability of robot characters C-3PO and R2-D2, who return in the upcoming film.

“When I first saw Star Wars, it was so hard to relate to what was happening,” Abrams says. “It was so not where I live. It was so not what I know. As soon as you had those two characters show up, immediately you’re laughing and you’re comfortable. … You think, now I know who I am. Now I know I can fit in here. ”

“C-3PO seems more like us,” Colbert adds. “Like, what would I do in that situation? I’d probably panic and run away. That’s what C-3PO does almost every time.”