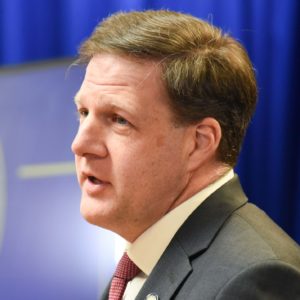 President-elect Joe Biden’s call for a national mask mandate will be met with a cold shoulder by New Hampshire Gov. Chris Sununu, who dismissed the notion of national safety mandates as “a nice political talking point.”

Biden has posted his plan to address COVID-19 once he takes office, and it includes his pledge to “Implement mask mandates nationwide by working with governors and mayors and by asking the American people to do what they do best: step up in a time of crisis.”

Legal scholars overwhelmingly agree that despite his insistence to the contrary, Biden’s calls from the campaign trail for a mask mandate imposed by the federal government were unconstitutional. As the progressive website Vox put it, “Biden’s national mask mandate will be a national mask suggestion.”

And so Biden will have to rely on persuasion — and perhaps a bit of political coercion.

According to NBC News, a Biden campaign official said governors who don’t agree to impose the mask mandate will see the president-elect pressure them by doing a local politics end run. “If a governor declines, he’ll go to the mayors in the state and ask them to lead,” the official told NBC. “In many states, there is the capacity of mayors to institute mandates.”

It’s a tactic that’s unlikely to work in New Hampshire, where cities like Nashua and Portsmouth have already imposed mandates and the mayor of the state’s largest city, Democrat Joyce Craig, has repeatedly failed to get a mask mandate passed by her Board of Aldermen.

“I have a lot of concerns over any national safety mandates,” Sununu told InsideSources. “I don’t know how they would even be implemented. Frankly, it sounds like a nice political talking point by folks who haven’t really thought this through.”

Sununu has declined to issue a statewide mask mandate. He’s also refused to impose state rules on local school systems regarding how and when to allow students to return to classrooms. Instead, he argues that communities in the sparsely-populated North Country face very different circumstances than urban enclaves in the state’s southern tier. He believes the same local-control approach should be applied to the states.

“One size fits all big government national safety mandates with mask orders or whatever are just not going to work,” Sununu said.

Currently, 34 states have some form of mask mandate, with Utah joining the list on Monday. Most require masks in public indoor spaces, though some states like Massachusetts and Maryland (both blue states with Republican governors) mandate mask-wearing outdoors, too.

Like most of America, New Hampshire’s seen an increase in positive COVID-19 test results as temperatures have cooled. Even so, the state’s seven-day average positive test rate has yet to reach two percent. As of November 9, that was the eighth-lowest rate in the U.S.

Sununu was won a third term as governor last week by a nearly 2-to-1 margin in a state Biden won by seven points. Polls show 80 percent of Granite Staters approve of his handling of COVID-19.

“I think we do it right,” Sununu said. “We have a nice model here. Why would we screw that up now?”