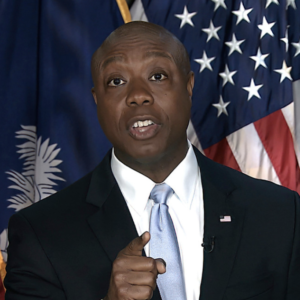 Senator Tim Scott of South Carolina turned the traditionally thankless task of responding to a presidential speech into a political opportunity, delivering a rebuttal to President Joe Biden’s remarks that has Republicans talking in the First-in-the-nation primary state.

“I thought that he did a phenomenal job. He’s got a great story,” New Hampshire Republican Party Chairman Stephen Stepanek told InsideSources. “I think at this point [Scott] would be considered one of the top tier candidates. There’s a lot of really good people who are looking at it and quite frankly I think any of them would be significantly better than what we have right now.”

Scott, the Senate’s only African American Republican, wove together details of his compelling personal story with policy critiques of Biden’s first 100 days in office.

“We get to live in the greatest country on Earth. The country where my grandfather, in his 94 years, saw his family go from cotton to Congress in one lifetime. So I am more than hopeful — I am confident — that our finest hour has yet to come. Original sin is never the end of the story. Not in our souls, and not for our nation. The real story is always redemption,” Scott said Wednesday evening.

As for Biden, Scott said “we need policies and progress that bring us closer together. But three months in, the actions of the president and his party are pulling us further and further apart.”

“I think it was the single best rebuttal speech that’s been delivered since the practice began,” said former White House speechwriter John Podhoretz on the Commentary Magazine podcast Thursday.

“Tim Scott’s story and achievements are impressive. That’s why the Democrats, and frankly some in the mainstream media, are doing their best to marginalize him,” Biundo told InsideSources. “They understand he is a threat and that he would make a strong 2024 contender if he chose to run. His speech last night was pitch perfect.”

Scott used the opportunity to push back against the left’s claims of deep-rooted American racism.

“Hear me clearly: America is not a racist country. It’s backwards to fight discrimination with different types of discrimination. And it’s wrong to try to use our painful past to dishonestly shut down debates in the present,” said Scott.

Democrats in New Hampshire and across the nation pounced on Scott’s statement.

So many progressives used the racially demeaning hashtag #UncleTim to insult the African American lawmaker, the phrase trended on Twitter for hours until the online outlet blocked the content. Progressive attacks were turned on their head, however, when Vice President Kamala Harris echoed Scott’s comment.

“I don’t think America is a racist country, but we also do have to speak truth about the history of racism in our country and its existence today,” she said Thursday morning.

For his part, Scott called the liberal reaction to his speech “disappointing.”

“They have doubled down that they are going to not attack my policies but they are literally attacking the color of my skin. You cannot step out of your lane according to the liberal elite left,” Scott said.

Drew Cline, president of the right-leaning Josiah Bartlett Center for Public Policy, says Scott has made himself a player in 2024.

“Scott was an excellent spokesman for his party and for Americans who are concerned about Washington using COVID as an excuse to lurch the nation to the far left culturally and politically,” said Cline. “He instantly put himself into the conversation regarding top presidential contenders, both nationally and in New Hampshire.”