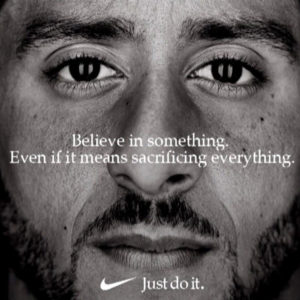 Nike has crossed the Rubicon; so has Barack Obama. Now, both are at the point of no return.

What’s compelling about this former president/shoe company juxtaposition is that they appear to be in pursuit of the same target. And that’s what we’ll call the “Protest Generation.”

Obama said as much Friday when he delivered his scathing WWE smackdown of Donald Trump in Champaign, Ill. Many of us have been patiently waiting for “when.” As in when would Obama defend himself and his legacy. And call out Trump … by name.

That essentially was Obama filing his protest.

Nike — no stranger to taking risks (remember the controversial “Revolution” commercials with The Beatles in 1987?) — obviously filed its protest by aligning with Colin Kaepernick. He’s the former NFL quarterback who spearheaded the highly debated kneeling-during-the-national-anthem movement in the NFL, beginning in the summer of 2016.

Note what Obama said during his speech in Illinois, “If you’re tired of politicians who offer nothing but ‘thoughts and prayers’ after a mass shooting, you’ve got to do what the Parkland kids are doing. Some of them aren’t even eligible to vote, yet they’re out there working to change minds and registering people, and they’re not giving up until we have a Congress that sees your lives as more important than a campaign check from the NRA.”

By 2020, many of the those “Parkland kids” will be ready to vote. And they can buy Nike shoes NOW.

Therein lies the connection: Obama is expecting them to vote Democratic in the 2020 presidential election and Nike is eyeing their disposable income for years to come.

The target is young people like the “Parkland kids,” the ones who captured the nation’s attention after they mobilized, strategized and idealized massive protests all the way to Washington after their house of learning was the site of one of the worst school massacres in U.S. history. On Valentine’s Day.

Kaepernick has become the face of the athletes’ protest movement. Nike featured him as the centerpiece of a powerful two-minute commercial that commemorates the 30th anniversary of the company’s popular “Just Do It” campaign.

That’s another link: Nike is campaigning; so is Obama. “The biggest threat to our democracy is indifference,” Obama declared.

Nike’s advertisement with Kaepernick invoked a more radical message, “Believe in something — even if it means sacrificing everything.”

Nike, which has apparel deals with both college and NFL teams, is taking a huge gamble by hitching its shoe/clothing wagon to perhaps the most polarizing athlete in the galaxy.

Allen Sanderson is a professor of sports economics at the University of Chicago. He related that Nike’s bold move is unprecedented for a major company. “I think it’s interesting that Nike is choosing sides,” Sanderson said, “since most companies want to remain neutral.

“You don’t want to lose half your customers. Because of that, I’m puzzled about what Nike did. But I’m sure Nike has done its homework, and they have discovered some benefit in it for them.”

Which brings us back to Obama, the first internet-comfortable president.

Remember that eye-opening survey released by the Pew Research Center in July that indicated 44 percent of respondents voted Obama the best president of their lifetimes. Well, guess which demographic cleared the widest path to hop on the Obama Train.

That’s why it cannot be a coincidence that Obama’s chosen venue to blast off about Trump for the first time happened to be at the University of Illinois before an admiring throng of screaming students on Friday.

Millennials (those defined as born between 1980 and 1999 or Generation Y) were the group most likely to choose Obama, with 62 percent naming him as their first or second choice for top president. And in the statistics-every-marketer-should-know category:

—The internet-savvy millennial generation is larger than the Baby Boomers and three times the size of Generation X (those born 1965 to 1979), according to Aimia, a marketing and loyalty analytics business firm.

—Millennials’ annual spending power is estimated to reach $3.39 trillion by the end of 2018, according to Oracle, a computer technology company.

—Also, 75 percent of millennials say it’s fairly or very important that a company gives back to society instead of just making a profit, according to Forbes magazine.

—And millennials are the most ethnically diverse generation ever, according to Salesforce, a customer relationship management platform.

—Plus, millennial investors who use Robinhood, a no-fee brokerage outlet popular among younger stock traders, added Nike to their portfolios more than usual last week. Robinhood tracked 15,191 such investors in Nike last week, up 45 percent from the previous week, according to Business Insider.

That’s a quintuple victory for Obama and Nike, as Generation Z (or the iGeneration) grows up (those born between 2000 and present), with a cell phone from birth. They are potential long-term customers for both Obama and Nike.

Still, both Nike and Obama could face major impediments.

As professor Sanderson cautioned, “What happens if a white, conservative kid from the Midwest, say at the University of Michigan, doesn’t like this Kaepernick arrangement and decides to tape over the Nike Swoosh on his uniform.”

And Obama’s anti-Trump, anti-Republican speeches could rally the GOP base big time for the 2018 midterms and the 2020 election.

We’ve already seen the photos and video of customers burning their Nike gear. Furthermore, the College of the Ozarks (a private, Christian school in Point Lookout, Mo.) announced after Labor Day that it would discontinue wearing Nike apparel, with school president Jerry C. Davis, in a statement, proclaiming Nike’s choice of Kaepernick was “promoting an attitude of division and disrespect toward America.”

But the dissenters surely won’t dissuade Nike or Obama. Because both have passed the Rubicon. That means there’s no turning back now.