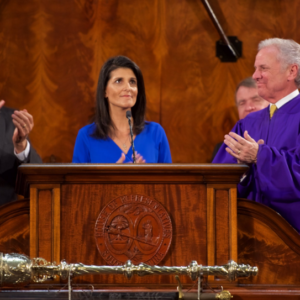 President Donald Trump is right. The United Nations will be very different when his appointee for ambassador to the assembly, South Carolina Gov. Nikki Haley, assumes her post after confirmation by the U.S. Senate.

The appointment of Haley could not be more timely given the increased focus on the United States’ recent voting record in the United Nations. President Obama’s legacy of lackluster leadership in the assembly over the last eight years must be course-corrected. Especially after Ambassador Samantha Power’s recent abstention during the U.N. Security Council resolution criticizing Israeli settlements. Their actions hardly instilled confidence in the direction the Obama administration pursued.

Haley is the ideal candidate to turn that around. She will be the bold force with proven leadership experience capable of standing with our allies and protecting American interests. Her record as governor tackling tough issues shows her to be a strong leader capable of ushering necessary change. The American people need someone like her standing with our allies against unfriendly nations and clearly communicating the policies of the United States.

As governor, she proved her abilities as a negotiator in bringing legislators with opposing views together to pass meaningful legislation for the betterment of South Carolina. Further, under her leadership, South Carolina expanded trade with countries like Canada, France, Germany and Japan. Haley’s pursuit of bringing companies from around the globe to South Carolina helped lower South Carolina’s unemployment numbers to its lowest in 15 years. This experience will be invaluable as she negotiates with foreign nations at the United Nations.

Prior to serving as governor, Haley demonstrated a commitment to serving her community by joining the board of directors of the Orangeburg County Chamber of Commerce in 1998 and, then in 2003, the Lexington Chamber of Commerce. In 2004, Haley was elected to the South Carolina House of Representatives representing Lexington County and becoming South Carolina’s first Indian-American elected official. During her five years as a state representative, Haley served in Republican leadership and worked on issues ranging from education to labor and commerce.

As Trump stated, Haley has a record of bringing opposing sides together in the interest of the public. After the tragic shooting at Emanuel AME Church in Charleston, Haley spearheaded an effort to unite both conservatives and liberals to remove the Confederate flag from South Carolina’s statehouse. Her steadfast commitment to principle and doing what is right will serve American interests well at the United Nations.

As House Speaker Paul Ryan stated, “If you want to hear an inclusive leader who’s visionary, who’s got a path for the future, who’s brought people together, who’s unified, it’s Nikki Haley.”