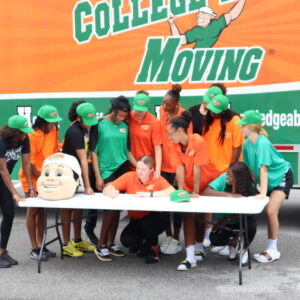 This initiative could loom as the biggest thumbs-up for gender equity since President Richard Nixon signed the futuristic Title IX federal mandate into law on June 23, 1972.

In the real world, it’s a long-overdue policy finally approved by the NCAA (actually forced down its throat) that allows college athletes to profit off their Name, Image, Likeness.

Beginning at 12:01 a.m. on July 1, college athletes became unbound and unwound to negotiate their own deals and agreements for pay — men and women.

It took the University of Central Florida’s women’s basketball team a mere 120 hours to reach a year-to-year renewable agreement with a company, College HUNKS Hauling Junk and Moving.

The UCF women hoopsters consummated terms in which each team member will receive an up-front payment of $500 — with bonuses and commissions based on business growth — for promoting the hauling company through social media and appearances.

HUNKS’ co-founder and owner Nick Friedman told InsideSources, “From my perspective, our desire to partner with UCF was sort of a micro-step to shine a spotlight on women college athletes. Female athletes now have the ability to create their own platforms through social media and partner with many brands. It won’t solve everything (in terms of gender equity), but it certainly can help level the playing field.” (HUNKS stands for Honest, Uniformed, Nice, Knowledgeable, Service.)

UCF forward Masseny Kaba told college-sports journalist Chris Hays of “The Orlando Sentinel” how she’s been working on her self-marketing/promotion skills, explaining, “I’m just getting myself out there and letting anyone who might have serious inquiries know how they can contact me.” Kaba, like thousands of college athletes, gained a fifth year of eligibility because of the coronavirus pandemic.

Back in time to play Let’s Make a Deal.

With that, if the UCF women can reap such a deal, the prospects should be limitless for the traditional basketball powerhouses, such as Stanford, Connecticut, Baylor, South Carolina.

Many of us remember a time when women were viewed as more ornamental than transcendental.

Now, we are witnesses to “Livvy’s Land.” Livvy is Olivia Dunne, an 18-year-old gymnast at LSU. She has 3.9 million TikTok followers and 1.1 million followers on InstaGram. Word is that she has met with major agents, such as the envied Creative Artists Agency, all of which could translate into $4 to $5 million in income for her.

Why should guys like Mark Zuckerberg monopolize the fun of starting a lucrative business from a college dorm room?

Dunne one day may be known mononymously — “Livvy,” like Adele or Drake.

But to Jane Piliavin, professor of social psychology emerita at the University of Wisconsin, “Livvy” could be a Lone Star among a constellation of tiny flashlights. She advises observers to temper their optimism regarding women’s share of the NIL treasure trove.

“Having a lifetime of being a woman in society,” Dr. Piliavin, 84, told InsideSources, “I don’t think women will fare that well. We’ve made gains in politics with women, but that’s only because men have done so badly.”

Then, she offered a noteworthy disclaimer, “I hope I’m wrong.”

Women also can capitalize on such college sports as softball, ice hockey, and soccer: ESPN’s softball ratings have increased in tournament time; hockey has the added marketing potential of next year’s Winter Olympics, and soccer gets a boost from this month’s Summer Olympics, the World Cup and the unparalleled legacy of former North Carolina star Mia Hamm, whose 1992 Sports Illustrated for Kids rookie card sold at auction in June for a women’s record $34,440.

Said Maggie McKinley, deputy director of athletics at the University of Cincinnati, during a national ZOOM call discussing NIL on July 6: “I keep bringing up the education piece. We’re trying to teach our student-athletes how to brand themselves, and what do they want to be associated with, because whatever they’re endorsing, whatever they’re associated with becomes a part of their brand.”

In other words, be brand selective.

And in four years, her college freshman NIL earnings could be the beginning of gender equity at warp speed.