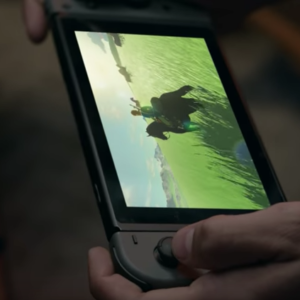 Nintendo Details the Future of Gaming to FCC

Nintendo gave U.S. regulators the exclusive on the latest details of its upcoming console, the Nintendo Switch, a video game system designed from a different approach to the next generation of consoles, according to December filings with the Federal Communications Commission.

Nintendo’s traditionally non-traditional approach to new platforms was confirmed for the Switch in October. The company dropped an upbeat YouTube trailer showing a dock with a portable screen and detachable controllers. The two controller halves detach from a traditional-looking controller and attach to both sides of the docked screen, which lets users take their game seamlessly from a home television to a walk in the park or party with friends, where they can detach the controllers again for multiplayer.

The trailer focuses heavily on the Switch’s portability, and shows players taking the portable screen on flights, road trips, walks with the dog and social gatherings. That makes battery life the first big question, and while the FCC filings don’t detail an average charge according to engadget, they do reveal the battery will be non-removable or interchangeable on page four of a test report.

Nintendo Switch’s onboard battery will have to boast significant lifespan out of the dock to follow through on its debut ad, which spent more time showing where it can played than gameplay itself. Players will likely be carrying a portable wall or battery charger for longer trips.

Documents also revealed the Switch will connect to WiFi on the 2.4GHz and 5GHz spectrums, the latter a new and less-crowded option Nintendo’s Wii U console doesn’t feature. Switch will also offer Bluetooth connectivity, a feature missing from Nintendo’s popular 3DS portable console.

The company’s strategy has steered more toward innovative gameplay than the enhanced graphics of its Sony PlayStation and Microsoft Xbox competitors. The motion controllers of the Wii put Nintendo on top of the console war in 2006, but its follow-up Wii U platform’s portable controller with a built-in screen was received as gimmicky, underpowered, and dropped the company into last place.

That hasn’t discouraged Nintendo from building outside the traditional console box. According to other reported leaks and comments from developers, the Switch’s NVIDIA-powered graphics hardware will indeed be underpowered compared to its contemporaries, with its GPU running at 768MHz — slower than even a Shield Android TV’s 1GHz. It’s unclear if the system will display in full HD 1080p resolution or 720p.

The Switch’s power is further reduced when you take it mobile, running at 40 percent of the docked device’s speed to meet thermal and battery life targets. It’s debut ad appears to confirm the lack of focus on graphics, showing clips of users playing a port of “The Elder Scrolls V: Skyrim” — which came out in late 2011 on the last generation of consoles — and a more stylized-looking new Legend of Zelda, which traditionally favors artful design over realistic rendering.

Still, the focus on mobile in our increasingly connected yet on-the-go culture could mean a hit for Nintendo, whose core IPs like Mario, Zelda, and Metroid have never focused on graphical realism. Nintendo is expected to announce more details including price during a livestreamed event in mid-January, and the console itself will be released in March.