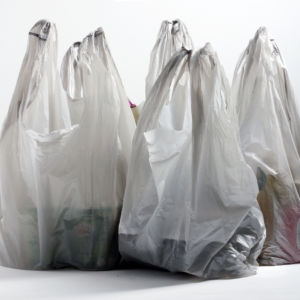 In fact, New Jersey is the first state to take the extreme step of outlawing paper bags in stores larger than 2,500 square feet.

And if a local business refuses to comply, the state has set up what opponents call a “rat line” — a phone number and website where customers can report it to the Department of Environmental Protection for alleged violations.

“Plastic bags are one of the most problematic forms of garbage, leading to millions of discarded bags that stream annually into our landfills, rivers, and oceans,” the Democrat said when he signed the legislation. “With today’s historic bill signing, we are addressing the problem of plastic pollution head-on with solutions that will help mitigate climate change and strengthen our environment for future generations.”

New Jersey is not the only state to ban plastic bags. At least eight others have similar laws, along with some big cities like Boston and L.A. However, New Jersey’s ban is considered the strictest in the nation. Unlike other places where retailers charge a small fee for customers who request a plastic bag, patrons in New Jersey do not have that option.

“No single-use plastic bags can be used at store registers, free or paid,” Katie Kausch reports at NJ.com. And as for paper bags, she notes “the average grocery store is over 30,000 square feet, so the size restriction means even the smallest Trader Joe’s will be banned from doling out brown paper bags.”

While environmental organizations including Sierra Club applaud plastic bag bans, policy groups such as the Reason Foundation say they’re getting the science wrong.

Julian Morris, senior fellow at Reason Foundation, says bans on plastic or single-use bags at stores unnecessarily limit the availability and use of a highly beneficial technology that has made shopping more convenient, likely reduced the incidence of food-borne disease, and creates less CO2 than the alternatives.

“Also, the average high-density polyethylene bag gets used more than once, often for transporting items, or for disposing of waste,” says Morris, author of “How Green is That Grocery Bag?” “So, they are not actually ‘single use’ bags.”

Zachary Taylor, director of the American Recyclable Plastic Bag Alliance, notes that when single-use bags are pulled from shelves, consumers then buy other thicker, more plastic-intensive bags, to take their place in the trash can or for doggie duty.

“The ban on single-use bags is being framed as a ‘bag ban,’ but what it really does is force consumers to use alternative products. These are the bags with handles, that are predominantly manufactured or imported from some of the world’s worst polluters,” Taylor said.

“And they’re still made of plastics, like polypropylene or nylon — materials that can’t be recycled at the end of their lifecycle.

“You’re starting to see reporting on home delivery just driving more of these reusable stitched handle bags to consumer’s homes, where they’re having a greater [negative] environmental impact than the products that were banned in the first place,” Taylor added.

Supporters of the ban say customers should bring their own reusable shopping bags from home.  “It’s a small price to pay for helping to save the lives of millions of animals…and our planet,” says a blog about reusable bags on Pens.com.

Morris says any notion that those bags are superior to plastic bags is simply wrong.

“For example, there is evidence that reusable bags can transmit food-borne diseases if they are not adequately cleaned between uses,” says Morris. “Meanwhile, paper bags are generally far less sturdy than plastic bags and hence more prone to break, which can damage goods.”

Morris adds that “numerous lifecycle studies” have shown that for typical use patterns, single-use plastic bags are a better option than the alternatives when it comes to carbon emissions and consumption of natural resources.

Writing for City Journal, legendary environmental reporter John Tierney rejects the claim that “single-use plastic bags are the worst environmental choice at the supermarket. Wrong: they’re the best choice.” Despite being strong enough to handle the weekly shopping, they are “so thin and light that they require scant energy, water, or other natural resources to manufacture and transport.”

The result, Tierney reports: “The net effect of banning plastic grocery bags is more global warming. Exactly how much more depends on which researchers’ life-cycle analysis you choose, but there’s definitely more carbon dioxide in the atmosphere.”

And so, while environmentalists may be behind New Jersey’s anti-plastic-bag push, even green groups are acknowledging the data and advising carbon-sensitive consumers to shun cotton bags — including the organic ones — because of their larger carbon footprint.

As for the “bag blowing in the wind” argument, Morris also has an answer for that.

“If a municipality is thinking about banning plastic bags because campaigners say the bags are causing litter, it is probably time to take a look at the litter and waste management situation,” says Morris. “The presence of plastic bags on streets, sewers, and beaches is a sign that people are not disposing of their waste properly.”