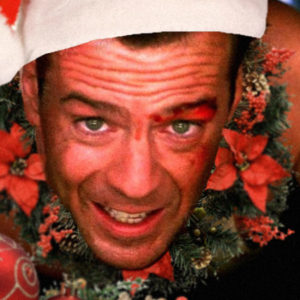 No, Die Hard Is NOT A Christmas Movie, And Everybody Knows It.

For Twitter fans and internet trolls, the #DieHardIsAChristmasMovie meme has transitioned over the years from a head-turning hot take to a familiar holiday tradition today.  For people who live their lives on the web, the meme’s arrival is a sign of the season, like the inflatable Santa appearing on your neighbor’s roof, or your social-justice-warrior niece screaming “Turn it off, turn it off!” when “Baby It’s Cold Outside” pops up on iTunes playlist. (The song is supposedly pro-date rape.)

This year, the Die Hard Christmas movie debate left the web and reached the American mainstream. It’s featured on the New York Times list of “10 Classic Christmas Movies.” Simon and Schuster published an illustrated book called “A Die Hard Christmas.”  And perhaps most significant, 20th Century Fox released a new trailer for the film pitching it as a holiday flick, which in turn launched another flurry of media coverage over the (alleged) controversy.

The argument over adding John McClane the New York Detective next to Buddy the Elf, Frosty the Snowman and Rudolf the Distraught Bullying Victim Red-Nosed Reindeer in the pantheon of holiday heroes has gone from internet meme to national obsession. Which is fascinating given that it’s so obviously not true.

Die Hard is NOT a Christmas movie.  And almost everybody knows it.  In fact, a new poll by Morning Consult found that, after years internet trolling on behalf of the cause, only 25 percent of Americans buy in. A whopping 62 percent say “No, no, no!”

So universal is this truth that the Die Hard debate even bridges the partisan divide. As Joanna Piacenza of Morning Consult told InsideSources.

“There are a lot of political divides on non-political issues. Walmart vs Target, for example. Republicans tend to shop Walmart, Democrats go to Target. But one thing that brings us all together? Bruce Willis,” she said.

Americans may want to stab each other with icicles over Donald Trump and the Democrats, but rejecting the Die Hard Christmas humbug is a bipartisan effort. Just 26 percent of Republicans and Democrats buy into the Die Hard meme.

Still don’t agree? Then ask the man himself.

No, not Santa. Bruce.

“Die Hard is not a Christmas movie. It’s a G–d–m Bruce Willis movie,” the action movie icon said over the summer.

“I don’t care what Bruce Willis said…. Die Hard is ABSOLUTELY a Christmas movie. Happy Anniversary, Die Hard.” And he’s right about the anniversary part. This supposed Christmas classic was released 30 years ago this year.

And maybe Chappaquiddick is a driver’s ed film.

So why has this become a trend? One theory is that it’s part of our social-media-driven “hot take” culture.  Facebook, Twitter and Instagram all reward outrageous and controversial comments.  For example, another meme that both pre-dates and encompasses the Die Hard Christmas narrative is #SlatePitches, used to describe those oddball articles your friends post on Facebook with bizarre headlines like “Vegans Kill More Cows Than Cowboys!” or some such nonsense.

The hashtag comes from an actual online magazine, Slate, a liberal site known for posting articles with insane-sounding headlines over essays that often stretch logic to the breaking point to make their (mostly-indefensible) cases. Actual Slate headline:

“What Iran Can Teach America About the Fight for LGBTQ Rights.”

The original Slate headline that sparked the trend was “Creed is Good” which, if you’ve seen the boxing flick starring a young Michael B. Jordan and a very old Sylvester Stallone, makes perfect sense. Unfortunately this headline is from 2009 and was about the rock band. (And just for the record: No, they’re not.)

So social media rewards crazy claims. But it also mercilessly punishes any online misdeeds. One offensive tweet can end an entire career (Ask Roseanne Barr). Tweets that were fall-down funny a few years ago can cost you a spot on the Oscars (Right, Kevin Hart?). Even dumb tweets from your early teen years can come back to haunt a Heisman Trophy winner (Kyler Murray, anyone?)

The trick is to appear to be edgy, but without an actual edge. (Think Steven Colbert making fun of Democrats). Calling a profanity-laced, blood-and-guts action film a Christmas movie fits the bill. At first glance your take sounds hot. Upon inspection, it’s actually room temperature.

“You see this with other stuff, too,” Bunch told InsideSources. “Is the dress blue or gold? Is a hot dog a sandwich?  People love getting worked up over these things. The idea is to get all the passion of a political debate, but without any of the potential danger.”

For Bunch—who’s been called “the #SlatePitches of the cultural Right”—the sin isn’t the faux-outrageousness, it’s how this offbeat social-media trend has been absorbed by corporate America.

“The significant part of the Die Hard meme is that it’s so mainstream that a big company like 20th Century Fox actually made a trailer based on an internet meme, so they could make more money for themselves.”

Which is a sure sign that a social moment has reached its natural end. The Die Hard debate has become so passé that now would-be provocateurs are dragging other clearly non-Christmas movies into the mix, like Gremlins and Kiss, Kiss, Bang, Bang. Adam Serwer of the Atlantic tweeted out his Top Christmas movies list and it looked like this: 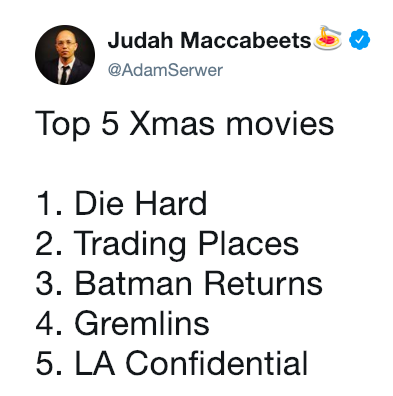 Batman Returns?  Once you hit “Danny De Vito as The Penguin” territory, you know you’re near the end of the ride.

And it should end, because the entire conversation was ridiculous from the beginning. There’s a very simple test to determine, once and for all, if a movie is a Christmas movie: Watch it on your summer vacation.  If your friends or family walk in and ask “Why are you watching [insert title here]? That’s a Christmas movie!”—you’ll know.

And nobody has ever said that about Die Hard.