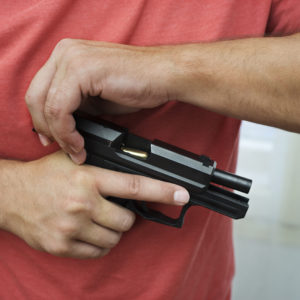 Now that Georgia has passed constitutional carry, exactly half the states are on board in expanding an inherent right enshrined in our Constitution. Still, myths persist about the so-called dangers of permitless carry legislation and what it means for violent crime. Constitutional carry simply means that if a person can lawfully own a gun, he (or she) can carry that firearm (concealed or not) without bureaucratic paperwork from the state.

Since 2010, 23 states have enacted constitutional carry, and more will likely do so by the end of the year. Despite evidence to the contrary, gun-control advocates continue to scare the populace claiming these laws result in a surge in crime.

“Permitless carry will put our communities in danger,” says Cathy Weinmann of Indiana Moms Demand Action. “We cannot let this attack on public safety go unanswered and must hold our leaders accountable at the ballot box.”

Since 1997 when the study of right-to-carry (both shall-issue and permitless carry) laws’ impact on crime began, 40 of the 52 studies showed that the implementation of right-to-carry laws either did not increase or coincided with a decrease in violent crime.

A common, albeit misguided, criticism of constitutional carry is that “anyone is allowed to carry a gun.” Fortunately, this is not the case. Those who have a felony or other violent convictions are subject to restraining orders, or are otherwise prohibited by law from purchasing guns are also barred from carrying them under a permitless system. Individuals must still meet the qualifications and pass a background check to buy a gun to carry it. Thus, like North Carolina’s pistol purchase permit, the state’s concealed carry permitting system is a needless and redundant system rendered obsolete by superior federal background checks. North Carolina currently allows qualified citizens to carry guns openly without a permit, which may alarm some but has presented no danger to the public or increased crime.

The right to adequate self-defense is a natural right that supersedes all written documents, including the U.S. and North Carolina constitutions. John Locke called the right to self-defense “a fundamental law of nature.”

The American founders believed these rights to be so inherent that some did not see the need for their enumeration in the Bill of Rights because they are self-evident. For many who may not be able to defend themselves from attackers vastly outsizing them, adequate self-defense necessitates armed self-defense. Thus, the right to bear arms is not just a constitutional right but a natural right bestowed by God unto all.

Burdensome application fees, yearlong wait times and bureaucratic processes infringe upon this right. The need to defend oneself often arises in fractions of a second. Many North Carolinians find themselves unable to navigate the complicated and expensive process required for a concealed carry permit. Thus, they find themselves defenseless when seconds mean the difference between life and death.

It is time to recognize the right of North Carolinians to defend themselves and remove unnecessary obstacles to the exercise of this right. Constitutional carry for North Carolina simply restores the plain meaning of the Second Amendment text for millions in the state. Of course, this is a right that tens of millions in other states already enjoy. It’s time for North Carolinians to ask their lawmakers why they are less deserving and get that response on the record.

John Ferebee is a research intern at the John Locke Foundation and planning to attend law school in the fall of 2022. He wrote this for InsideSources.com.