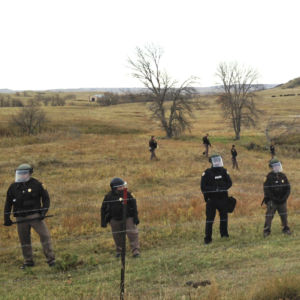 A Dakota Access pipeline protester defies law enforcement officers who are trying to force them from a camp on private land in the path of pipeline construction, Thursday, Oct. 27, 2016 near Cannon Ball, N.D. Soldiers and law enforcement officers dressed in riot gear began arresting protesters who had set up a camp on private land to block construction of the Dakota Access oil pipeline. (AP Photo/James MacPherson)
News

For the state of North Dakota, the #NoDAPL protests are a massive unexpected expense. With each passing day, the costs of providing law enforcement, emergency services, and, when necessary, access to the court system for the protesters continue to add up. The state has already been forced to dip into its emergency funds to cover the expenses, and while North Dakota’s congressional delegation has been pushing for federal aid, so far they have received only a tepid response.

Sen. John Hoeven’s office told InsideSources that after numerous calls for law enforcement resources, the senator was able to double the number of Bureau of Indian Affairs officers sent to the area, as well as have Customs and Border Patrol personnel sent to the protest site. A statement from the Bureau of Indian Affairs, though, reveals that the officers were present to “protect the peace and provide for the safety and well-being of the people of the Standing Rock Sioux Tribe” and others on the reservation.

So far, North Dakota’s congressional delegation has been unable to secure funding for the state, despite placing requests with a variety of federal programs, including a Department of Justice reserve fund and a Department of Homeland Security Program aimed at countering violent extremism.

The congressional delegation has been expressing increasing frustration with the administration’s inaction.

On October 17, North Dakota’s three-member delegation sent a letter to Attorney General Loretta Lynch, Lt. Gen. Todd Semonite, head of the Army Corps of Engineers, and Secretary of the Interior Sally Jewel. The letter acknowledged the tense situation on the ground which necessitated an increased law enforcement presence.

“[O]ur state and local governments have spent a considerable amount to keep the communities safe,” the members said in their letter. “Our county sheriffs have spent $1.8 million; our state law enforcement has spent $3.75 million.”

The letter explained that the state expected to spend an addition $750,000 to $1 million on law enforcement each week that the protest continued.

“It is our concern that this level of funding is not sustainable for our state to maintain,” the letter concluded.

More than a month later, on November 23, Sen. Heidi Heitkamp met with an unnamed White House official whom she told that the administration had “failed to offer the federal assistance necessary to help law enforcement.” In a statement, Heitkamp, a Democrat, expressed her frustration that after months of meetings with the White House, the Army Corps of Engineers, the U.S. Department of Justice, and the U.S. Department of the Interior, the administration had offered little support.

“For months, I’ve requested over and over the law enforcement resources to keep our communities safe,” the statement read. “In the time the Administration has dragged its feet and offered scant support, our own law enforcement has grown weary – stretching and wearing resources thin not just near the protest sites but in communities rippled across our state.”

The sentiment is shared by Gov. Jack Dalrymple, who has been calling on the federal government to provide public safety assistance since the Army Corp decision was first delayed in September. At the time, Dalrymple vowed “to hold the federal government to its word” on offers to send manpower and resources to the area. Later in the fall he reiterated his frustration that federal agencies were unwilling to send U.S. Marshalls to assist the state’s law enforcement.

Despite the efforts of the state’s top elected officials, for the time being, North Dakota stands alone outside the Standing Rock protests.