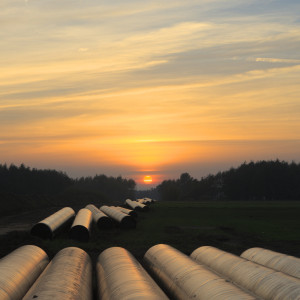 Regulators in Minnesota finished up a second day of state Public Utilities Commission (PUC) hearings discussing approval of the Enbridge Line 3 pipeline. Alberta-based Enbridge Energy company is looking to build a 1,031-mile-long pipeline between Alberta and Superior, Wisconsin. The project would replace an aging existing line while allowing for expanding capacity and is the largest in Enbridge’s history.

It would also cut diagonally across northern Minnesota, running through areas that native tribes claim have spiritual and cultural significance. To mitigate the environmental impact, Enbridge proposed a route that either replaces the existing Line 3 or runs parallel to a pre-existing pipeline owned by another company. Route changes were made in order to avoid running the pipeline through the Fond du Lac and Leech Lake reservations.

Hundreds of people lined up outside before the hearings on Monday and Tuesday and minor squabbles broke out over hearing tickets. Some protesters claimed that Enbridge was paying people to take tickets without necessarily attending the hearing in order to keep protesters out of the seats.

“I believe that six pipelines is enough, and there should not be a permit issued, neither through Leech lake, nor through a new route,” said Winona LaDuke, a long-time Native American environmental activist, at the hearing.

Meanwhile, Enbridge argued that a new line would be safer than trying to repair its aging equipment. On Monday, the company also promised a corporate guarantee behind the new pipeline in case a leak caused environmental damage. It also promised to help establish a decomissioning fund for all pipelines in Minnesota.

“Line 3 has some unique integrity issues … and they are best addressed with this replacement, and that’s just common sense, commissioners,” Eric Swanson, an attorney for Enbridge, told the PUC.

Enbridge has been highlighting the age of its existing line in its push before the PUC. Last year, the state’s commerce department concluded that shipping demand was not high enough to necessitate a new Line 3. Afterward, Administrative Law Judge Ann O’Reilly, who reviewed the case, found that the new pipeline was needed because of the poor quality of the existing line.

Meanwhile, environmentalists are hoping that when corrosion forces the existing pipeline to close, it will not be replaced.

Some of the commissioners expressed frustration over a lack of good options during the hearing. Essentially the choices are to repair the aging line or to replace it with something larger. Repair would require digging up large sections of pipe and would not change the fact that the line itself was laid in the 1960s.

Both supporters and opponents of Line 3 are wondering if it could turn into another protest camp similar to those in 2016 outside of Standing Rock. Like the Dakota Access Pipeline, opposition to Enbridge 3 has rallied members of several area Native American tribes and environmentalists.

In addition, many native rights supporters argue that while the new route does not pass through reservation territory, it would put the pipeline on “treaty land.”

“This route would establish a new corridor for Enbridge through Central [Minnesota] within the 1855 Ceded Territory,” Leech Lake Band of Ojibwe Tribal Chairman Faron Jackson said in a statement released late Tuesday.

“The 1855 Ceded Territory is important to us. The Leech Lake Band retains rights, a connection, and an interest in the management of these lands,” he continued.

Enbridge’s attorneys argued that the oil will come out of the ground regardless of whether the pipeline is constructed or not. However, Line 3 would be safer and more efficient than shipping by truck or rail. Canadian oil producers see the pipeline as critical as production has outstripped existing pipeline capacity. Because of its age, the pre-existing Enbridge 3 pipeline had not been operating at full capacity for decades. Completion of a new line would allow it to double its shipping capacity.

Minnesota’s regulatory process is predicted to add an additional $1.2 billion to the cost of the pipeline. The PUC is expected to release its decision next week.