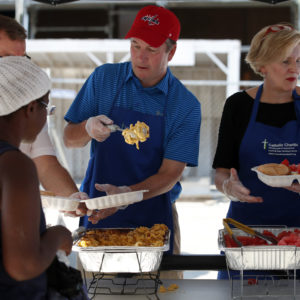 No, Justice Kavanaugh Would NOT Be Trump’s “Get Out Of Jail Free” Card

“[Kavanaugh] has very strong views about a sitting president not being interfered with, with criminal charges or civil lawsuits. … Trump saw Kavanaugh as his Get-Out-of-Jail Free card, and he saw that it was too good to pass up.” – Sen. Ben Cardin (D-MD)

“Kavanaugh, who could be presiding over a case should the Pres be indicted, thinks that the Pres can’t stand trial. Trump has nominated a get-out-of-jail free card.” — Rep. Carolyn B. Maloney (D-NY)

A lifetime appointment to the most powerful court in the land should come with tough questions and a thorough vetting. But there’s a line where “tough” crosses over into “ridiculous,” and the question of whether President Trump picked Brett Kavanaugh for the Supreme Court as part of a scheme to stay out of jail falls on the wrong side of that line.

The claim is based on an article by Judge Kavanaugh that appeared in the Michigan Law Review regarding his time working for Ken Starr on the Clinton investigations. After an extensive review of the independent counsel’s work, and his own under what he called a “badly flawed” law, Kavanaugh says:

“Looking back into the late 1990s, the nation certainly would have been better off if President Clinton could have focused on Osama bin Laden without being distracted by the Paula Jones sexual harassment case and its criminal investigation offshoots.”

This is the reason Democrats like Sen. Chuck Schumer and Sen. Cory Booker want to keep Kavanaugh off the bench? It sounds like a soundbite from a James Carville hit on CNN’s Crossfire in 2002. If Kavanaugh had said this at a Hillary for President rally in 2016, would anyone have disagreed?

Kavanaugh also wrote that when the Supreme Court allowed the Paula Jones lawsuit to go forward and forced President Clinton to testify under oath, they “may well have been entirely correct” under the law.

“With that in mind, it would be appropriate for Congress to enact a statute providing that any personal civil suits against presidents, like certain members of the military, be deferred while the President is in office,” Kavanaugh wrote.

In other words, Kavanaugh does believe that letting a president be president while he’s in office and deferring non-presidential litigation until after he leaves is good policy. But not from courts—from Congress.

Kavanaugh’s opponents, like Sen. Booker (D-NJ) have extrapolated his position into “Get Out Of Jail Free.”  Trump “picked the one guy who has specifically written that a president should not be the subject of a criminal investigation, which the president is right now,” Booker said.

“Why did Trump stick with Kavanaugh?” Sen. Schumer (D-NY) asks. “Because he’s worried that Mr Mueller will go to the court and ask that the president be subpoenaed and ask to do other things necessary to move the investigation forward and President Trump knows that Kavanaugh will be a barrier to preventing that investigation from going there.”

Not to be outdone, Maryland’s junior U.S. Senator Chris Van Hollen says Kavanaugh on the court represents a vote for “king-like powers for the president of the United States.”

Writing for the Washington Post “Fact-Checker,” Salvador Rizzo agrees: “Kavanaugh’s position in this article is different from saying the president can’t be indicted under existing law.”

Rizzo also points out the obvious: “If Kavanaugh thinks the law already bars an indictment of the sitting president, as some Democrats claim he does, why would he call on Congress to pass a law that shields the president from criminal charges?”

And then there’s the math problem: Let’s say Kavanaugh is utterly corrupt, that he plans to serve as Trump’s toady on the Supreme Court.  OK, that gives Trump a total of one votes.

The only way the Kavanaugh conspiracy makes sense is if you assume that Trump somehow ensnared at least four other members of the court into his nefarious web. It’s theoretically possible that Trump appointee Neil Gorsuch is in on the scheme, but Roberts? Alito? Thomas?

Thomas has been on the court so long, the Mrs. Trump who watched his confirmation hearings on TV was named “Ivana.” (Thomas was confirmed in 1991, Trump and Ivana split up in 1992).

So unless Donald Trump has a DeLorean with a flux capacitor hidden in his garage, the entire conspiracy theory collapses.

Trump critics might argue that the other four judges don’t have to be corrupt, just authentically conservative. This view of the law would cause them to support a strong executive and, therefore, side with the president in some future legal fight with Mueller. Well, if it’s possible to rule on behalf of Trump for legitimate legal reasons, isn’t it also possible that Kavanaugh shares that legitimate view based on his principled jurisprudence?

If that’s the case, then what Kavanaugh critics are arguing is that Trump shouldn’t be allowed to have any conservative because one of the consequences of an ideologically-consistent conservative court might be more deference to the presidency. And since the president of the moment is Donald Trump, the ideology is converted into corruption.

According to former Assistant U.S. Attorney and legal analyst Andrew C. McCarthy, the reason Kavanaugh’s opponents are turning to conspiracy theories is because they can’t bear to face reality.

“Kavanaugh is somebody who was confirmed 12 years ago by a 21-vote margin in the Senate.  In the ensuing dozen years, he has been one of the most relied upon and affirmed Appellate judges in the United States, one whose opinions on a number of occasions have been adopted by the High Court.”

“I can’t think of a more concrete example of what it means to be a ‘lawyer’s lawyer’ than Brett Kavanaugh,” McCarthy said.

Are Democrats playing the “Get Out Of Jail Free” card because they don’t have anything better in their hand?