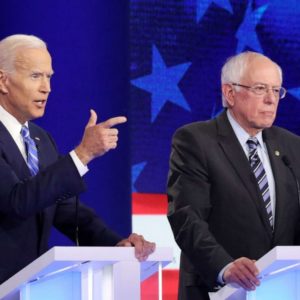 No Matter What Happens on Thursday, The DNC’s Debates Are Already a Disaster

Call it the Rodney Dangerfield of debates: Thursday’s scheduled campaign contest in California just can’t get no respect.

The Democrat’s sixth debate was supposed to be held at UCLA, but a labor dispute involving the local chapter of AFSCME — the union representing thousands of state university service workers — forced the college to cancel.

So Democrats moved the debate to Loyola Marymount University, just north of L.A. — only to discover LMU is having its own labor issues. Now all the 2020 Democrats who’ve qualified for Thursday’s debate say they won’t cross a picket line to attend. LMU says it’s hopeful something can be worked out, but even if the university does, Bill Whalen of the Hoover Institution sees another problem:

“If all goes according to plan, the debate will occur the day after the House supposedly votes on the two Trump impeachment articles,” he writes in Forbes. “Who’s up for another three hours of seven Democrats me-too’ing the awfulness of Donald Trump? Cancel the debate and Americans might see it as a tiding of comfort and joy.”

Whether the California debate happens or not, many political pros believe the Democratic debates are already a disaster.

“The DNC’s debate rules are totally jeopardizing their purpose: To winnow down the field and find a winning nominee,” says veteran journalist Walter Shapiro, who’s covering his 11th presidential campaign for The New Republic. “They have created a real mess.”

Democratic strategist Michael Starr Hopkins called the current lack of diversity on the debate stage a “disaster” for Democrats and suggested that the DNC’s own debate rules inadvertently determined the potential outcome.

“The DNC thought it would help progressives demonstrate support, but it ended up hurting campaigns like Harris, Booker, and Castro,” Hopkins told Fox News. “Instead of focusing on building infrastructure, they had to spend insane amounts on donor lists to get on the debate stage.”

Now the candidates are complaining, too. Sen. Cory Booker (D-N.J.) sent a letter to the DNC complaining about its debate rules excluding him from the California stage and — he believes — driving Sen. Kamala Harris (D-Calif.) out of the race entirely.

“The escalating thresholds over the past few months have unnecessarily and artificially narrowed what started as the strongest and most diverse Democratic field in history before voters have had a chance to be heard,” Booker’s letter claims.

An underperforming presidential candidate grousing about the rules is nothing new. But all seven frontrunners in the race have also signed the letter calling out the DNC.

So has fellow Democratic candidate Julian Castro who, like Booker, is barely a blip in the polls. Castro has put the DNC “on notice,” declaring that either it creates “a presidential primary system that actually reflects the diversity of this country and of this Party,” or get new leadership.

Laura Belin, a progressive commentator covering Iowa politics, warns: “Iowans may be tempted to dismiss this criticism as sour grapes from a candidate who didn’t make the debate stage. That would be a mistake. It’s a widespread and growing sentiment in the Democratic Party.”

In New Hampshire, former DNC member and US ambassador Terry Shumaker, who co-chaired Bill Clinton’s NH campaigns, Terry Shumaker, believes the DNC has mishandled the debates this cycle from the beginning. “Thank goodness we don’t have a national primary, which would only favor the well-financed candidates; instead, we have state contests that traditionally start in four early states including Iowa and geographically-compact New Hampshire to give lesser-known candidates a serious chance at running for president.”

Shumaker and Shapiro both harken back to previous election cycles when candidates participated in local, ad hoc debates in the early states, where questions focused on local issues important to local voters. Today, political debates are programming profit centers for cable news networks, rather than ways for early-state voters to evaluate the candidates.

Plus, Shapiro notes, “the high-profile string of national debates promote the trend of running for president as a career move, rather than because you’re a serious candidate.” And that creates a vicious cycle of a flood of candidates (see 2016 and 2020) who make the debates even more difficult to manage.

“Forty years ago party officials could say, ‘I know what a good candidate looks like. And I know what one doesn’t look like — A Johnny one-note with no experience like Andrew Yang,'” says Shapiro, author of the book “One-Car Caravan” about the 2004 Democratic presidential primary. “Now, the DNC is terrified of Bernie’s supporters. Bernie’s backers are burning with rage, and the DNC is trying to buy them off.”

The DNC argues that it’s set the rules in a way to both allow relatively unknown candidates a legitimate shot in the race (see “Buttigieg, Pete”) while at the same time using donor thresholds to prevent wealthy candidates from buying their way on stage.

“Our qualification criteria is extremely low and reflects where we are in the race. Once voting starts in February, our criteria will reflect those contests, which is more than appropriate. We’re proud to have given candidates so many opportunities to get their message across, and will continue to have fair criteria that reflects each point in the race,” the DNC said in a statement released to Politico.

They’re wrong, says Shapiro. “The DNC miscalculated the ability of wealthy candidates to game the donor thresholds. People like [former Maryland Congressman] John Delaney have figured out that they could spend money to buy donors.”

The same with polling in the early states. “Wealthy candidates spend a bunch of money in Iowa or New Hampshire to boost their numbers right before the polls, then when they stop spending, their numbers go back down,” Shapiro says.

Both Shumaker and Shapiro propose a return to an approach that relies on the early states to winnow the field, not national debates based in part on national polling.

“Having national TV DNC-run debates starting more than eight months before these contests undermines this successful practice and is a detrimental deviation from the traditional primary calendar,” Shumaker says. “The DNC debates force a national focus way too early to give the lesser-known candidates just getting started a chance to compete meaningfully. There is no good reason for this.

“I mean where was the burning voter desire for debate in July and August?”