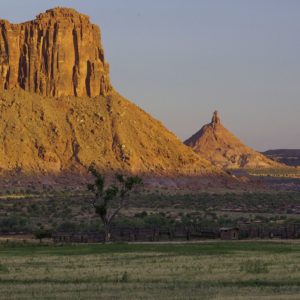 The waning days of the Obama administration were marked by a series of last minute attempts to extend the reach of the federal government. One of them was the creation of the Bears Ears and Gold Butte national monuments. All in the stroke of a pen, then-President Barack Obama added more than 1.6 million acres to the control of the federal government. On Monday, at a speech in Salt Lake City, President Donald Trump reversed Obama’s order, much to the chagrin of both Native American groups and environmentalists, who fear that the loss of the national monument designation with make it more difficult to protect ancient cultural sites. Their fears may be premature. Although, Bears Ears may have lost the official distinction of national monument, that does not mean that the thousands of acres of land are suddenly returning to private hands.

In his remarks at the Utah state capitol on Monday, Trump praised Utah’s natural beauty, turning this into an argument for increased local control. His order will reduce the size of the two national monuments by 65 percent and more than 1 million acres, a move that he framed as a restoration of local control.

“The families and communities of Utah know and love this land the best, and you know the best how to take care of your land. You know how to protect it, and you know best how to conserve this land for many, many generations to come,” he said, adding that this state-level control should not be replaced with “the whims of regulators thousands and thousands of miles away.”

Shrinking the two monuments will not release the land from federal control, however. Prior to the creation of the Bears Ears and Gold Butte National Monuments, these areas were controlled by the National Forest Service, which continued to manage some of the same areas later under the national monument distinction. Trump’s proclamation returns these tracts to their previous designation as part of the Manti-La Sal National Forest.

As national monuments, the lands were removed from any consideration for mineral exploration. This was particularly difficult for the oil and natural gas industry, which had long sought permission to drill in the area. Since 2013, energy companies have unsuccessfully petitioned the Bureau of Land Management (BLM) for drilling permits on 100,000 acres on or near the land that became the monument. Under the Obama declaration, these areas were removed from future mineral leasing. Now, they are again open to potential exploratory drilling.

The BLM’s Utah office holds auctions for drilling rights four times per year, with the next auction for the area including Bears Ears set for March 2018. At present it is too early to say if there will be interest in the areas potentially opened to development by Trump’s announcement. In 2015, though, mineral rights for parcels immediately outside of the boundaries of the monument were sold to a Wyoming company.

Supporters of the change are quick to explain that, thus far, no company has expressed interest in drilling in the archeologically significant section of the area. Current exploration is on the northern edge of the monument and has continued on leases granted before the monument designation was first made.

Native American tribes are worried that without the national monument distinction, cultural artifacts at the Bears Ears site, including a number of ancient indigenous sites, will be stolen or destroyed.

“The original intent of the Antiquities Act was to protect our tribal sacred sites and the cultural objects in those sites. The history of our indigenous ancestors lives in these sacred places. Today’s action to reduce Bears Ears and Grand Staircase-Escalante endangers our freedom of religion, our histories and our communities,” stated Jefferson Keel, President of the National Congress of American Indians, who also expressed support for tribal groups who planned to resist the president’s changes.

The announcement will change little in the short term, since the Navajo tribe and environmental groups, including the sporting gear company Patagonia, have pledged to challenge the decision in court. They will argue that the Antiquities Act, which governs the creation of national monuments, does not specify that

Meanwhile, state officials in Utah had petitioned the federal government to reduce the size of the national monument. In September, as the Department of the Interior requested a review of national monuments, the state of Utah developed a proposal to balance preservation concerns and the desire to reduce federal control of the area.

The state of Utah does receive payments from the federal government when mineral leases are sold. Western states also receive some recompensation for lost tax revenue in areas that are largely federally owned.