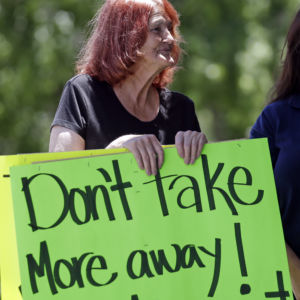 A protester looks on after a meeting to discuss turning the Bears Ears buttes into a national monument. (AP Photo/Rick Bowmer)
News

With the Stroke of a Pen, Obama Adds to Federal Control of the West

President Obama wants to leave a big legacy when his term ends in January, a 1.64 million acre one, in fact. With a presidential proclamation on Wednesday, Obama established two new national monuments in Nevada and Utah, blocking development and dramatically increasing the Federal government’s control over the area.

“The Gold Butte area contains an extraordinary variety of diverse and irreplaceable scientific, historic, and prehistoric resources, including vital plant and wildlife habitat, significant geological formations, rare fossils, important sites from the history of Native Americans, and remnants of our Western mining and ranching heritage,” Obama said in his proclamation about the new monument.

For the first time, Native American tribes will have input into the management of the national park land, with representatives from Navajo, Ute, Hopi, and Zuni tribes serving on an advisory commission to help create a management plan for the area.

The proclamation removes the land from consideration for use for mining and ranching, specifically forbidding mineral leasing. The new monument includes the federal land where rancher Clive Bundy grazed his cattle illegally, leading to a standoff with federal authorities in 2014.

In Nevada, the reaction to the new monument was split. Democratic Congresswoman Dina Titus celebrated the announcement, saying in a statement that “Gold Butte’s story is one of perseverance and passion.”

Describing how efforts to preserve the wildlife, flora and fauna, and ancient petroglyphs in the area had begun in 1998, she thanked Obama for finally making their efforts successful.

“President Obama heard our cry and took the necessary action to save this natural treasure,” she said.

Titus had lobbied for the creation of the new monument alongside outgoing Senate Minority Leader Harry Reid. The state’s other senator, Republican Dean Heller, has long opposed further government involvement in the state’s lands. Heller wrote to Obama this spring, arguing against the unilateral creation of a new monument.

“The establishment of any new national monument in the State of Nevada, regardless of location, ought to be considered in the public Congressional process,” Heller wrote. “Only through this type of process, not unilateral action by the executive, can we ensure all parties, including those who support and oppose a given measure, have an equal opportunity to voice their opinions.”

Nevada Congressman Joe Heck has yet to release a formal statement on the new park, but joined with Heller, and Congressmen Mark Amodei and Cresent Hardy to introduce a bill protecting Nevada’s land sovereignty in early 2015.

“As the owners of more than 80% of our state’s land already, it should not be too much trouble to ask the federal government to allow Nevadans, their elected representatives, and the Congress to decide the locations and names of national monuments,” Rep. Heck said at the time.

If passed, the proposed bill would have prevented the president from creating new monuments in Nevada without congressional approval. The bill never made it out of committee.

Obama’s move was met with harsh criticism by groups who view the new parks as expansion of federal control in Utah, including the state’s wildlife board. Over the summer, the board wrote to Interior Secretary Sally Jewell, arguing Utah, not the federal government, should manage its own wildlife resources.

The expansion of federal control is a touchy subject in Utah. Already, the U.S. government owns roughly two thirds of the state’s land. The Bears Ears National Monument will increase that total by another 1.35 million acres. House Republican Reps. Jason Chaffetz and Rob Bishop spent three years drafting a bill to preserve much of the site while allowing for limited development. Their efforts stalled in the House.

“The midnight move is a slap in the face to the people of Utah, attempting to silence the voices of those who will bear the heavy burden it imposes,” Chaffetz said after the announcement. “It does not have the support of the Governor, a single member of the state’s congressional delegation, nor any local elected officials or state legislators who represent the area.”

He vowed to work with the incoming Trump administration to repeal the creation of the new national monuments. Trump’s pick for secretary of the interior, Rep. Ryan Zinke, supports curtailing presidential authority to unilaterally create national monuments.

The two new monuments are not the first time Obama has acted unilaterally to create new monuments in Nevada. In 2015, Obama established Basin and Range National Monument on 704,000 acres of land.