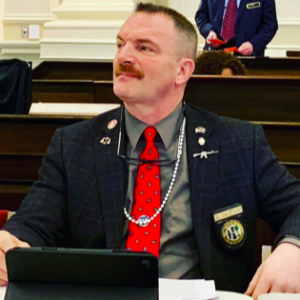 “What’s the deal with the pearls?”

That was the question heard at the New Hampshire statehouse Tuesday when a handful of Republican men showed up for a hearing on a proposed “red flag” gun confiscation bill wearing strings of pearls with their usual blazer-and-necktie business clothes.  Activists who gathered to support the proposed gun restrictions took the pearls to be a symbol of insult, directed at the women of the Moms Demand Action organization. 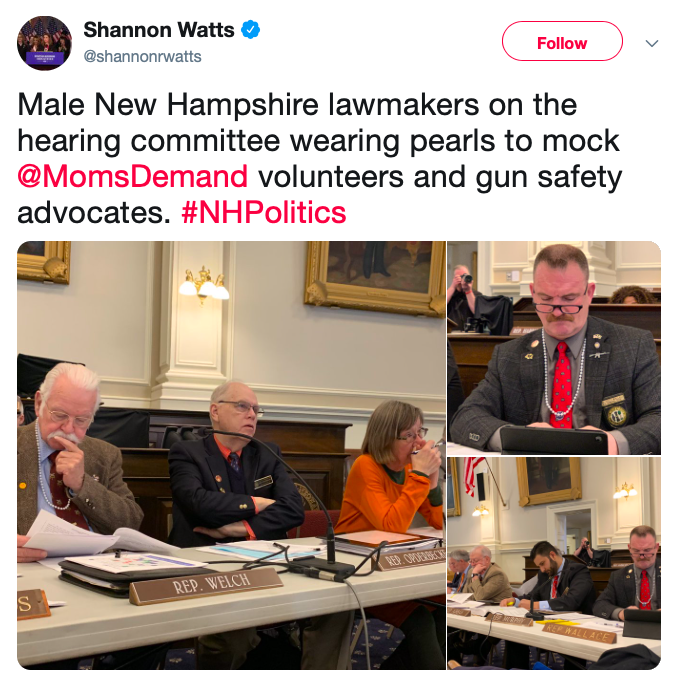 Among them was Shannon Watts of Moms Demand Action, an anti-gun group backed by liberal billionaire Mike Bloomberg. Watts tweeted several messages accusing the pro-Second Amendment Republicans of wearing the pearls to mock her fellow moms and their movement.

Pictures of guys in pearls quickly spread across social media, and the New Hampshire GOP lawmakers were soon being attacked as bullies across the United States. Several national figures and Democratic presidential candidates Cory Booker and Kamala Harris tweeted denunciations of the lawmakers. 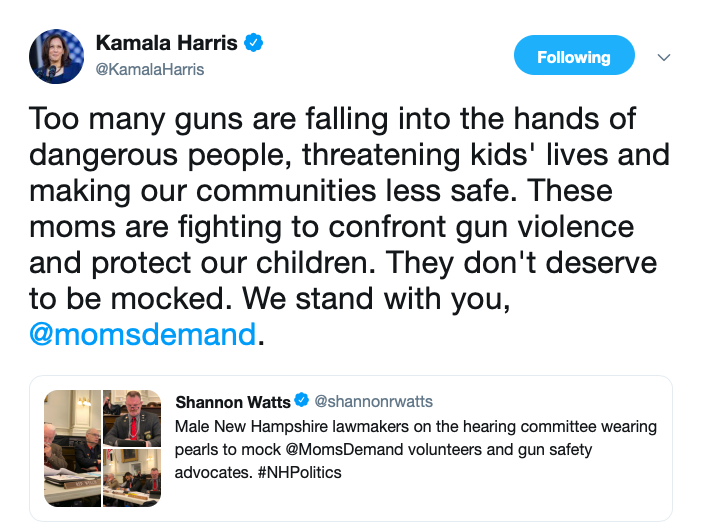 The story was soon featured in the national media, from cable TV  to the pages of the  Washington Post.  Only one problem:

“We’ve used pearls as a symbol of support for the right to bear arms — particularly the right of women to defend themselves — for years,” Kimberly Morin said. Morin is president of the New Hampshire Women’s Defense League, a pro-Second Amendment organization that opposed the “red flag” gun law being debated on Tuesday. In fact, its members were at the statehouse on Tuesday passing out the strings of pearls so that legislators, both men and women, could show their support. 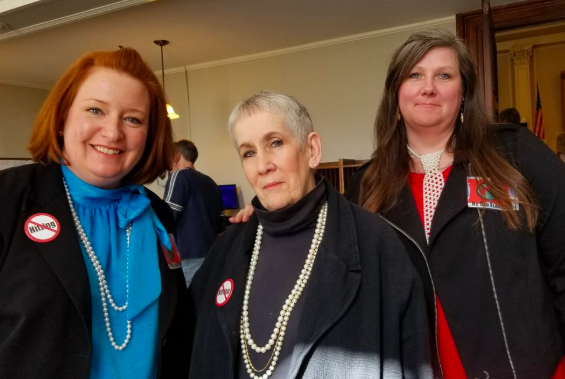 Members of the N.H. Women’s Defense League wear their trademark pearls to the state house in Concord, NH.

According to Morin, the NHWDL has used pearls this way since 2017, during the debate over “constitutional carry” legislation. When Republican governor Chris Sununu signed the bill into law later that year, some NHWDL members and supporters wore their pearls to the signing ceremony. “They’ve became a symbol representing the Women’s Defense League and our fight for women’s rights, for freedom, and against gun control,” Morin said.

The organization’s website includes photos of people wearing pearls at gun-related political events going back to 2017.  So while the pearls aren’t an obvious sign of support for gun rights, members of the New Hampshire legislature knew what they meant.

“They were telling me — one of the people who made the pearls a symbol — that I was lying,” Morin said. 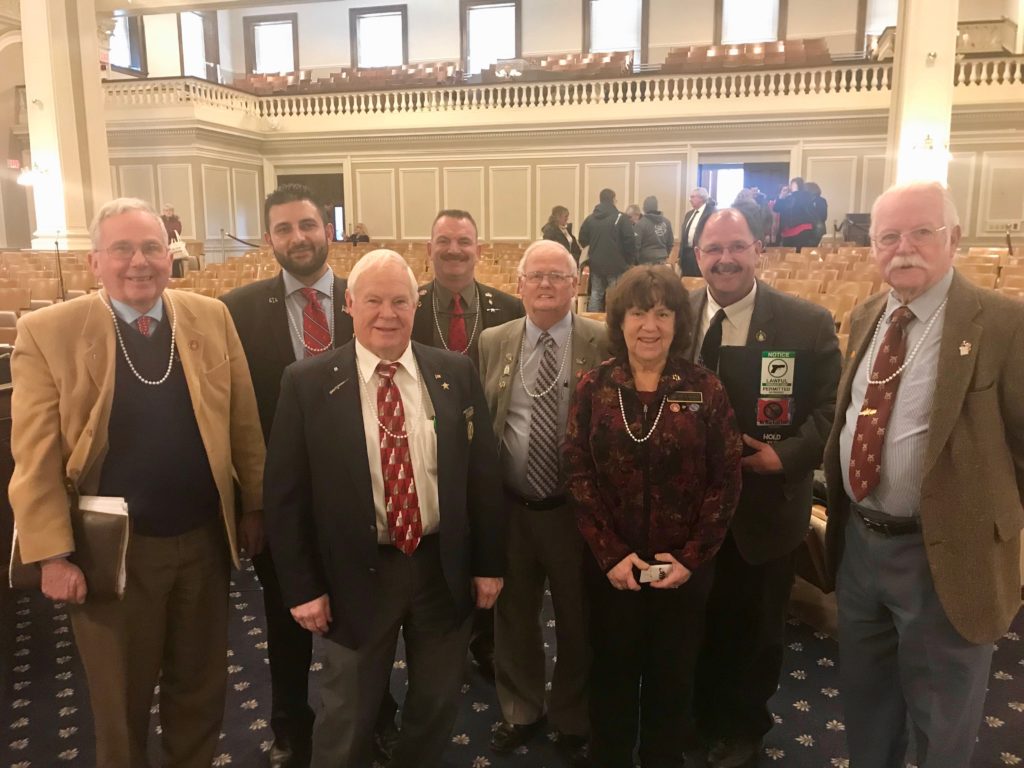 Pro-2A lawmakers, male and female, wear pearls at the request of the NH Women’s Defense League, at a state house hearing on Tuesday in Concord.

“The point of the pearls is to show support for the WDL,” said state Rep. Scott Wallace, one of the lawmakers who wore them during Tuesday’s hearing. “They’ve been a very active grassroots organization that supports the restoration of firearms rights here in New Hampshire. They’ve been very successful,” Wallace said.

Morin acknowledges that the symbolism of the pearls isn’t clear, and says she’s not upset that the out-of-state anti-gun activists didn’t understand. Soon after the first tweets from Shannon Watts appeared, Morin tweeted a photo of three board members of the New Hampshire Women’s Defense League —  all women —  wearing their pearls, hoping that would end the conversation. Instead, Moms Demand Action supporters pushed the false narrative even harder, she says. 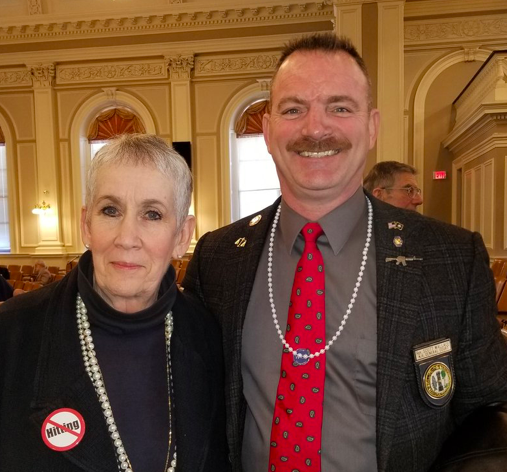 “They were telling me — one of the creators of the pearls being a symbol — that I was lying,’’ Morin says.

Anti-gun activists continued to claim, without evidence, that the pearls are intended as an insult. In multiple interviews with media outlets like the New Hampshire Union-Leader and CNN, Watts continues to accuse New Hampshire Republicans of using the pearls to mock grieving mothers.

“These lawmakers decided to wear symbols that essentially mocked the process,” Watts said after the hearing, when the meaning of the pearls had been made apparent.  “They were making light of survivors who were testifying on the suicide of a child, or women who were survivors of domestic abuse.”

Far from apologizing for her role in promoting a misunderstanding that incorrectly smeared these lawmakers as insensitive and anti-woman, Watts followed up 24 hours later by urging women to punish these men, saying:

“It’s my hope that the Moms Demand Action volunteers who sat through the hearing today will consider running against the men who had the audacity to mock the legislative process.”

Morin says the real goal is to keep the focus off the “red flag” gun law, which she calls “the most destructive piece of legislation ever introduced.” She also argues that this blatantly false narrative reveals why it is so hard for the two sides in the gun debate to reach compromises.

“How can we trust them in a discussion about something as important as the Second Amendment when we can’t even trust them not to lie about us over something as simple as the pearls?” Morin says. “When your opponents won’t operate in good faith, that’s a sign they’re not interested in reaching a compromise.”