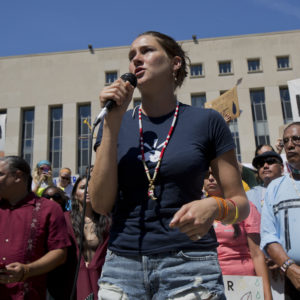 Actress Shailene Woodley speaks during a rally outside US District Court in Washington, Wednesday, Aug. 24, 2016, in solidarity with the Standing Rock Sioux Tribe in their lawsuit against the Army Corps of Engineers to protect their water and land from the Dakota Access Pipeline. A federal judge in Washington considered a request by the Standing Rock Sioux for a temporary injunction against an oil pipeline under construction near their reservation straddling the North Dakota-South Dakota border. (AP Photo/Manuel Balce Ceneta)
News

For months, activists protesting the Dakota Access Pipeline’s crossing of the Missouri River used Facebook, Twitter, and YouTube to encourage people from around the country to support their movement through donations or by physically coming to the camp. With construction stalled and temperatures dropping, however, the group has changed its message. In a statement on Friday, they told supporters to join protests against pipelines elsewhere in the country.

“There is no longer an open call for people to come join Sacred Stone Camp unless personally invited,” the statement read.

The statement comes after tribal chairman Dave Archambault II requested that protesters begin to leave the site before the winter weather became worse. After his request, some groups that had previously been strong allies of the DAPL protests have begun posting information about other ongoing pipeline protests.

“We, the Indigenous Environmental Network have decided to respect the Chairman’s request and begin the process of transitioning out of the Oceti Sakowin camp…Moving forward, IEN looks towards growing and furthering the momentum that has begun here at Standing Rock,” read one post from an organization that had been allied with the DAPL protesters since this summer.

Already, social media accounts connected with the North Dakota protests have begun to share information about protests in Florida, Arkansas, and New England. Previous attempts to recruit from among the Standing Rock protesters had failed to rouse the same levels of support as had been seen in North Dakota.

On Monday, two members of Arkansas Rising, a group organizing to stop the Diamond Rising pipeline, were arrested. Diamond Rising would carry crude oil for 440 miles between Oklahoma and Arkansas. Unlike the North Dakota protests, the Arkansas Rising protesters directly interfered with construction by locking themselves to an active track hoe. The group defended its actions by saying that “through nonviolent civil disobedience tactics, small crimes are accused in order to expose greater crimes.”

In addition to the Arkansas Rising protests, Standing Rock’s social media accounts directed supporters to campaigns to resist Spectra Energy’s Algonquin Pipeline in New England and to the Sabal Trail pipeline in Florida.

The protests are linked not only by their websites, but by the presence of certain activists. Sophia Wilansky was seriously injured during an altercation between police and protesters on the Backwater Bridge late last month. While many media outlets highlighted her youth and serious injury, few of them connecting Wilansky to her activist past. On June 29, Wilansky participated in a protest in West Roxbury, MA to try to halt construction of the West Roxbury Lateral pipeline. During the protest event, clergy from a variety of religions and denominations led a climate mass graves funeral, which ended with Wilansky, Karenna Gore, daughter of former Vice President Al Gore, and four others climbing into the pipeline trench to mimic being buried.

The protests in Florida, Massachusetts, and Arkansas do not have a connection to native rights like the DAPL protests. Instead, they are increasingly allied with environmental activist groups.