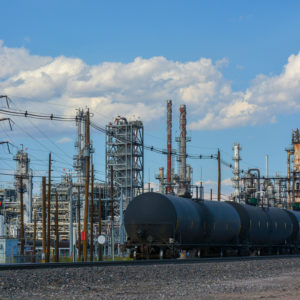 The state of North Dakota is preparing to file a federal lawsuit against Washington state and Gov. Jay Inslee’s administration over a controversial interstate crude transport bill. Earlier this month, Inslee signed into law Senate Bill 5579 that establishes new safety standards for unloading crude off trains sourced from oil fields in North Dakota.

Set to enter into force on January 1, 2020, SB 5579 orders oil refineries along Puget Sound to only unload crude from a rail tank car that meets an oil vapor pressure requirement of fewer than 9 pounds per square inch. The refineries currently process 638,000 barrels per day, using oil that meets North Dakota’s legal vapor pressure requirement of 13.7 pounds per square inch. North Dakota ships 150,000 barrels of crude by rail to Washington’s refineries every day.

“As the federal government continues to fail to exercise its full powers to ensure the safe transport of oil by rail, Washington needs to remain vigilant in protecting our communities from the very real risk of derailments,” Inslee said upon signing the bill into law.

SB 5579’s requirements could permanently ban Bakken crude shipped by rail to Washington’s refineries. North Dakota’s oil regulator argues that vapor pressure requirements in this bill are determined without a scientific basis, especially since the state legislature has already established safety regulations to curtail the volatility of Bakken crude in 2015 and previous legislative sessions.

The commission is now poised to sue Washington state for violating the federal Interstate Commerce Act.

“It is deeply disappointing that another state would attempt to impose restrictions that are both unreasonable and unsupported by science to block the transport of a legal product being shipped in a manner that is even safer than what federal standards require,” Burgum lamented.

No legal complaint has been filed yet.

William Yeatman, a constitutional law scholar at the Cato Institute, believes the only way North Dakota will have a solid case is if Washington is unable to prove that they have grounds to preempt federal law with SB 5579. According to Yeatman, the law allows states to regulate interstate rail safety as long as it meets three criteria.

First, the safety hazard must be local. Second, the regulation should not conflict with federal requirements. Lastly, the regulation does not unreasonably harm interstate commerce.

Before SB 5579 was signed into law, members of North Dakota’s congressional delegation sent a joint letter to Inslee imploring him to veto the bill on the grounds Yeatman described.

“The federal government maintains field preemption over the state of Washington for the operating practices and movement of hazardous materials by rail through the Federal Railroad Administration and the Pipeline and Hazardous Materials Safety Administration,” reads the letter signed by U.S. Rep. Kelly Armstrong, Sens. John Hoeven, and Kevin Cramer.

“While the state of Washington does have certain authority to legislate on health and safety issues, [SB 5579] does not offer a sound basis for doing so,” the letter concludes.