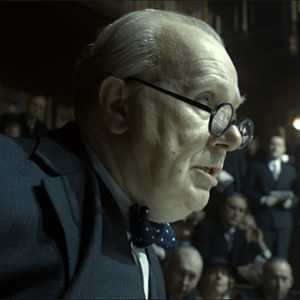 Gary Oldman as Winston Churchill in Darkest Hour
[IS] Opinions

WASHINGTON — Historical comparisons can be terribly flawed. Bearing that in mind, I could not help but think of talk about talks with North Korea while watching a new British film, “Darkest Hour,” all about Winston Churchill in the darkest early days of World War II spurning pleas to negotiate with Hitler’s Nazi Germany. Italy, Germany’s axis ally, offered to mediate between the two.

It would appear far-fetched to suggest that South Koreans and Americans adopt a similar stance about talks with North Korea, but the film does dramatically raise the question of how far to go to mollify an enemy. That’s a topic we hear constantly amid debate over whether to stage a “pre-emptive strike” on the North’s nuclear and missile facilities or go on looking for a peaceful resolution while applying ever tougher sanctions in hopes that Kim Jong-un will agree to negotiate the nuclear program that he vows never to abandon.

There is a parallel too between Italy’s offer to host negotiations between Britain and Hitler and the Russian Foreign Minister Sergey Lavrov urging the United States to take “the first step forward” to negotiations with the North.

Lavrov’s call is absurd considering that North Korea has already rejected Secretary of State Rex Tillerson’s declaration that he would be glad to talk to the North Koreans about anything with no preconditions. Lavrov’s purpose is to increase Russia’s standing in Pyongyang, with which Moscow has been striving mightily in recent years to improve ties. Moscow’s relations with Pyongyang soured after the end of Soviet rule in 1991, the break-up of the former communist bloc and, most important, the refusal of the Russians to go on selling vital materiel to North Korea at official rather than actual free-market exchange rates.

The parallel between Churchill’s resolve and the North-South Korean impasse might work the opposite way. To some Kim Jong-un might appear not as a tyrant in the Hitlerian mold but as a Churchill-like figure resisting mounting pressure from his enemies to give up all that he holds dear. It’s easy for pro-Northers to fantasize the North Korean leader as the brave underdog standing up against foes all around, answering rising sanctions with rising resolve. Or, in yet another analogy, South Korea’s President Moon Jae-in might be cast as a Chamberlain-like figure looking for dialog with a cruel enemy that will only exploit compromise and concessions, advancing steadily toward its goal of conquest of South Korea.

One wonders if “Darkest Hour” was really intended to inspire such analogies or simply to dramatize a turning point in modern history dominated by a single towering figure, namely Churchill. Regardless of the intent of the film, the comparison that sticks is that of a hero resisting negotiations that would surely have ended in frustration and failure, giving the enemy an advantage that would bring about defeat. If there is no figure comparable to Churchill battling those who would sacrifice the integrity of their country for an illusory “peace,” there is still a dictator with whom to contend.

Kim Jong-un has again betrayed his weakness with an extraordinary call for a “revolutionary offensive to uproot non-socialist practices.” The public declaration of this campaign suggests that enemies real and imagined will surely suffer and die. The campaign also verifies what has long been suspected, that Kim faces severe hostility among a poverty-stricken populace fed up with the cruel arrogance of the elite, notably the leader.

It’s possible, even likely, that Kim will order more missile tests, perhaps a seventh nuclear test, more to impress his own people than to frighten his foes in Seoul and Washington. The fear of North Korea sending a long-range missile laden with a nuclear warhead to the United States raises the basic question of whether compromise and vacillation are a good idea against any threat. That’s the message of “Darkest Hour” about one man’s determination not to let an enemy conquer, slaughter and enslave his people.