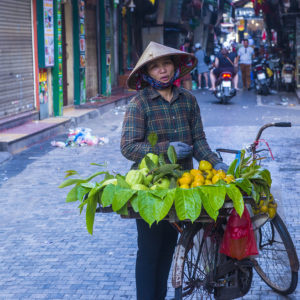 Vendor in a market in Hanoi, Vietnam
[IS] Opinions

North Korea Is Far From Being Another Vietnam

HANOI — The slogan “Hanoi, City for Peace” would have seemed unimaginable when I was a correspondent in Saigon at the height of the Vietnam War nearly half a century ago.

This capital of what we then called “North” Vietnam was the heart of a desperate surge southward that is still not entirely understood. The face of the drive was communist but the motivating force was a historic nationalist desire to reunify a nation that had inexorably expanded southward centuries before.

So doing, the Vietnamese had resisted Chinese control, had overrun the Cambodian or Khmer kingdom in the Mekong River delta, and then all but destroyed the Cham civilization that had also once flourished in the south. The fierce instinct for unity fed the war against the French colonialists that culminated in their defeat at Dien Bien Phu, the artificial division of Vietnam between two Vietnams in 1954 and unremitting warfare against U.S. forces and the Saigon regime that finally collapsed nearly half a century ago.

Against this background, it is almost unreal to be visiting here in an atmosphere not only of peace but of U.S.-Vietnamese friendship that had once seemed totally impossible. The atmosphere is made all the more incredible by the sight of the flags of Vietnam, the United States and North Korea testifying to Vietnam’s emergence as a strong and prosperous country eager for friendship on all sides.

It would be a mistake, however, to compare the experiences of Vietnam and North Korea. Yes, they are both communist countries, dominated by powerful central party rule, but Vietnam has long since gone capitalist with private enterprise flourishing on innumerable levels. The GDP of Vietnam increased by an amazing 7 percent last year even as the government expanded relations with the United States, seen as a foil against Chinese domination.

North Korea, in stark contrast, remains so tightly controlled that private markets have to flourish illegally or semi-legally for the sake of survival while legitimate large-scale private enterprise is largely unknown. Kim Jong Un’s switch to emphasis on economic development is more talk than substance even if he’s not ordering nuclear tests.

The contrast is even more striking when one considers the differences between latter-day South Korea and the entity we knew as “South Vietnam” during the Vietnam War.

South Korea’s economy is now the 12th-biggest in the world, defended by a military establishment that’s capable of withstanding attack from the North. South Vietnam was never more than an economic dependency of the United States even if the Vietnamese entrepreneurial spirit was evident then, as now, in the South as well as the North.

South Korea today is so strong economically that for sure North Korea is going to need lots of aid and investment beginning with construction of roads and railroads. All the while Kim Jong Un holds a club over the South in the form of a nuclear and missile program that threatens the region.

Which leads to the overwhelming difference between North Korea and Vietnam today. North Korea’s nuclear program makes it a rogue nation, breathing defiance for no reason other than to bolster the ego of a despotic dynastic ruler. Unlike North Korea, Vietnam has never wasted its resources on nukes and missiles or left its people to go hungry while sending tens of thousands into prison camps and kidnapping hapless victims from South Korea and Japan.

In theory, North Korea might share Vietnam’s suspicions, sometimes hostility, toward the overweening power of China. While Vietnam stood up against the Chinese in a border war 40 years ago, however, Kim has prostrated himself before China’s President Xi Jinping in visits to Beijing with his wife, sister, aides and advisers, looking for Chinese assurances and support.

Besides defying China decades ago, Vietnam has sought to counter China’s claims over the South China Sea. That’s a bold, risky policy in which Vietnam is ill-equipped to compel the Chinese not to exploit resources of oil and gas within its territorial waters. For that reason alone, Vietnam needs military ties with the United States that would have seemed the stuff of fantasy when I was writing about the war from Saigon in the late 1960s and early 1970s.

Yes, Saigon is now “Ho Chi Minh City,” named for the founder of modern Vietnam, but it’s a commentary on life in Vietnam these days that a younger generation that never knew the war still tends to call it Saigon. Vietnam may not be a “free country” politically, but the Vietnamese enjoy a degree of real freedom that North Koreans can only fantasize.