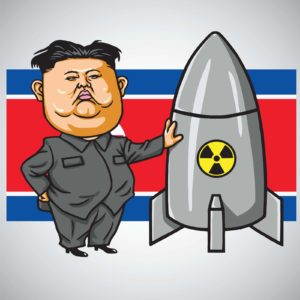 SEOUL — Hope for South Korea’s liberal President Moon Jae-in “engaging” the North in dialogue is in danger of running afoul of North Korean leader Kim Jong-un’s refusal to stop developing missiles capable of carrying a nuclear warhead to the United States. With a mere 41 percent of the votes in this month’s presidential election, Moon has no mandate to jettison the pro-American policies of Korean presidents since the founding of the Republic of Korea under Syngman Rhee in 1948.

Kim Jong-un, overseeing two missile tests since Moon’s inauguration, is claiming the North will soon be able to mass-produce mid-range missiles while preparing for a sixth nuclear test and developing a long-range type capable of carrying warheads to distant targets. His refusal to suspend North Korea’s missile program makes it difficult for Moon to carry out his campaign promises to revive the Sunshine policy of North-South reconciliation initiated by the late President Kim Dae-jung nearly 20 years ago and perpetuated by his successor, the late Roh Moh-hyun, whom Moon had served as chief of staff. The meetings of both these deceased liberal presidents with the late North Korean leader Kim Jong-il, father of Kim Jong-un, undoubtedly led Moon to think that he too should go on a mission to Pyongyang.

Given the depth of conservative and moderate sentiment, Moon cannot show weakness in the face of North Korean threats. That’s why, right after Kim Jong-un ordered a missile test less than a week after Moon’s election, he warned that dialogue would be impossible while the North engaged in “provocations.”

The rise of a liberal to leadership in South Korea, however, still leaves relations between Seoul and Washington in flux. Moon is not going to be as enthusiastic about the U.S.-Korea alliance as would a conservative. At the same time, as president, he cannot easily violate agreements made between the United States and South Korea’s previous conservative regime while Kim Jong-un is challenging him with missile tests.

Moon may have opposed the decision to plant a counter-missile battery known as THAAD, Terminal High Altitude Area Defense, on a golf course well south of Seoul but will have difficulty doing anything about it now that it’s there. U.S. defense officials argued that THAAD was needed to shoot down North Korean missiles at altitudes as high as 90 miles, and Korean military strategists believe it should stay.

Moon cannot appear so far to the left as to call for removal of THAAD while the North goes on testing high-flying missiles. He has not only endorsed the U.S.-Korea alliance but is going to Washington in the near future to meet President Donald Trump after having been widely quoted during his campaign as saying that he would like first to see Kim Jong-un in Pyongyang.

Moon and Trump will be meeting after visits to South Korea of three Americans with broad policy influence. First, there was Defense Secretary James Mattis, then Secretary of State Rex Tillerson and, finally, Vice President Mike Pence. All three proclaimed the “ironclad” relationship between the United States and South Korea.

Tillerson said “strategic patience” was over with North Korea and “all options” possible.

Considering Moon’s eagerness for negotiations with the North, Trump and his team have to deal carefully in order to preserve the alliance. U.S. commanders are convinced of the need for war games that infuriate North Korea. How else can the 28,500 U.S. troops in South Korea be ready “to fight tonight” on behalf of their South Korean ally as North Korea escalates the rhetoric — and improves its missiles?

Moon’s relationship with the United States, however, will be complicated by some of Trump’s remarks. South Korea under any president, conservative or liberal, would not pay $1 billion as Trump suggested was owed for THAAD. Trump is adding to controversy by calling for renegotiation of KORUS, the Korea-U.S. Free Trade Agreement, in view of America’s rising trade deficit with South Korea. Moon will resist Trump’s demands.

More important, Moon’s response to still more North Korean missile tests, or a sixth nuclear test, will be a clear indication of his outlook. How willingly will he enforce sanctions or adopt other stringent measures for dealing with the North? And what if North and South Korea came to blows again in the Yellow Sea, the scene of bloody North-South battles in recent years?

Washington has repeatedly vowed to rush to South Korea’s aid in a showdown. South Korea and the United States over the years have developed extremely close military ties on a working level. U.S. and Korean forces coordinate under a “combined command” while the South acquires military equipment, including fighter planes, from the United States.

Moon will have to consider all these relationships and obligations. They form the bedrock of the alliance amid North Korean threats and missile testing — even if the North spurns Moon’s overtures.