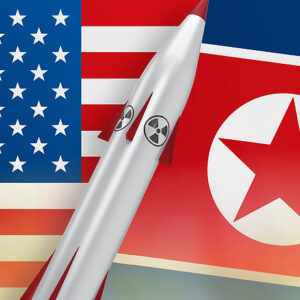 WASHINGTON — North Korea’s test of a long-range intercontinental ballistic missile capable of reaching the U.S. Capitol is barely noticed here while Americans focus on the war in Ukraine and immediate domestic issues, including wild inflation.

North Korean leader Kim Jong-un no doubt sees the test of a missile that might carry a nuclear warhead with the explosive power to wipe out entire cities as a way to intimidate the United States into doing away with sanctions, but he’ll have to test fire more of them to catch serious attention in America.

“I can’t get too excited about the latest missile test,” said an American friend who’s lived and worked for years in South Korea and Japan. “Everybody knew it was coming, but no one could stop it.”

Certainly, President Biden and his top advisers, notably Secretary of State Antony Blinken, have gone through the motions of ritualistic statements condemning the ICBM launch, and the United States is raising the matter in the United Nations, as it has done often after previous missile and nuclear tests.

It is going to take much more than a single ICBM test, however, to set alarm bells ringing in the corridors of power in Washington.

For that if for no other reason, it is thought Kim sooner or later will order the North’s seventh nuclear test. Kim may think a nuclear test will be needed to arouse real concerns inWashington.

Pyongyang’s Korean Central News Agency signaled the possibility of a nuclear test in a 1,100-word article boasting of the ICBM launch and the North’s “nuclear deterrence” against all enemies. The word “nuclear” appeared 13 times in the article, a warning of what lies ahead.

North Korea has not tested a nuke since September 2017, but North Korean physicists and engineers have gone right on making them, storing them in the North’s main nuclear complex at Yongbyon, north of Pyongyang, and in deep caves and tunnels elsewhere. By now North Korea is estimated to have 6o nuclear warheads.

Americans feel safe from North Korea’s nukes as long as the North Koreans have not figured out how to make a warhead small enough to fix to the tip of a missile. Before accomplishing that feat, however, Kim Jong-un hopes to arouse enough fears to persuade Biden and his advisers to drop sanctions as a prelude to a dialog in which he would press for dissolution of the U.S.  alliance with South Korea and withdrawal of U.S. forces from the South.

Thus, North Korea’s test of the latest Hwasong-17 opens a new chapter in the worsening confrontation of forces on the Korean peninsula. As a conservative government prepares to take over in Seoul, one of the first questions is whether the South should increase its missile defenses.

While brandishing missiles, South Korea’s President-elect Yoon Suk-yeol is sure to cooperate much more closely on defenses with the United States than was possible while the outgoing leftist president Moon Jae-in dreamed of an end-of-war declaration. It is hoped we can forget about a nonsensical statement that anyone could see as a prelude to yielding to North Korea’s demands.

Pyongyang, however, may be confident there’s little the United States will do about its latest missile test. Washington cannot count on the U.N. Security Council to impose new sanctions that both China and Russia are likely to veto.

Americans, meanwhile, remain largely unconcerned about North Korean missiles, even ICBMs. “The calculus remains the same,” said my American friend, looking back on years of assessing the confrontation with North Korea. “It’s a threat that can never be used.”

Still, he said, the test “brings back the question of how the most sanctioned country on earth can develop and manufacture missiles.” Policymakers may be sure China is propping up the North Korean regime in accordance with its strategy of challenging the United States everywhere in the region.