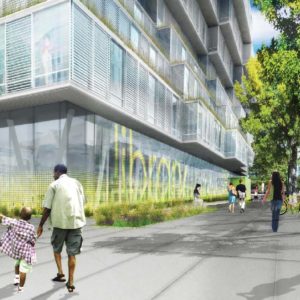 There are perhaps few things as American as a public library. Beginning in the early 18th century, Anglican missions in the colonies often subsidized libraries and the first public library in the colonies was founded in Boston before 1725. Benjamin Franklin famously founded a library in Philadelphia. Andrew Carnegie built more than two thousand libraries across the country. Today, the American Library Association boasts that there are more than 119,487 libraries in the U.S. Despite their long history, American libraries now suffer from declining popularity and rising operating costs. In Washington, D.C., the city is attempting to mitigate these costs through a public-private partnership agreement for its new West End library. The arrangement is a new way of looking at the public library, but no change comes without controversy.

Set to open on December 9 after years of planning and construction, the new library will be a tenant in a development that also includes 7,300 square feet of retail space, 71 high-end condos, and 93 apartments. The development was first proposed in 2007 but met with resistance because of its blend of public and private use areas. As a public-private partnership, the District of Columbia agreed to cede ownership of three parcels of land to EastBanc, a development company, with an agreement that the company would build both a new library and a new fire station as part of its development.

The old library was razed in 2014. This is the first time that a D.C. public library will be a tenant in a privately-owned building. The arrangement was the subject of a lawsuit by Ralph Nader and his group, the Library Renaissance Project.

The Library Renaissance Project sued, arguing that the development project did not have sufficient affordable housing. Nader admitted later that he thought EastBanc was making too much money off the deal, but the completion of the development was delayed by a full two years.

The West End development was the first time that Washington had adopted the public-private partnership model, which can help municipalities to better shoulder the costs of building new community facilities. Proponents argue that these arrangements allow government to take advantage of private-sector expertise and that they are especially useful for infrastructure projects. These public-private partnerships look different depending on the state and local regulations. Some projects involve arrangements to share a building. Others, such as a public library built in Dallas, Texas, share parking lots with nearby shopping centers.

The necessity of a unique arrangement like the public-private partnership shows the uncertain state of libraries today. They may be serving more patrons than ever, but as a percentage of the total population, fewer Americans are making use of public libraries.

Libraries hold a peculiar place in the American psyche. Most Americans like them–recent poll numbers report that three out of four Americans believe that libraries well serve the needs of their communities. Nearly 90 percent say that closing the local public library would hurt their community. When the question is more individually tailored, the numbers drop. Only 65 percent of Americans say that closing the local library would hurt them or their family. The same poll found that less than half of the population had actually been to a library in the last year and fewer than four in ten men had.

Statistics show that Washington’s libraries are already underused compared to the nearby area, despite the large sums of money spent on them. The 26 libraries in Washington, D.C. house a collection of more than 1.8 million print materials. Last year, statistics from the Institute for Library and Museum Services found that 314,000 people used the library, making a total of 4,189,520 visits. The system spent more than $54 million in the same period, making the cost per visit about $13. That’s twice the cost per visit of libraries in Virginia.

For Washington, a public-private partnership helped to bring about a new library facility that otherwise was unlikely to be built. After years of checking out books from other branches or the temporary library set up in the Watergate building, neighborhood readers will likely be pleased with the convenience of the new arrangement as well. Still, creative financing can do little to cover up the uncertain foundation of D.C.’s libraries. People like libraries, they just don’t always like to visit them.