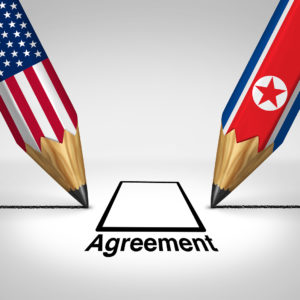 Now We Can Get Back to Work With North Korea

Time now to return to North Korea, the topic having been all but forgotten during campaigning for congressional elections seen as testing President Donald Trump’s grip on power.

No, Congress does not get to vote a president in or out of an office the way the British parliament or Japanese Diet vote for or against a prime minister. Still, Trump sorely had to retain control over the upper house of Congress, the Senate, which he managed to do in elections Tuesday for six-year terms for 35 of that august body’s 100 members.

As for the House of Representatives, the lower house, all of whose 435 seats were contested for two-year terms, yes, the Democrats gained a slight majority. House Democrats will have a lot of fun investigating everything from Trump’s tax returns, never revealed, to his profiteering off his hotels and golf courses, but they probably won’t impeach him. Even if they do, he can be sure the Republican-controlled Senate would not take the final step of convicting and ousting him.

With the elections out of the way, Trump can take a deep breath, stop the grandstanding about invasion of aliens plotting to infiltrate the U.S. way of life, and get back to dealing with his old friend from Pyongyang, Kim Jong-un. Kim has said he would like to meet Trump for a second summit, and Trump has said, sure, but maybe not until early next year, not right after the elections, as originally planned.

Trump still needs North Korea. The president would love to have peace and friendship on the Korean peninsula, rapprochement between the United States and North Korea, as his enduring legacy even if he’s less than successful in blocking a caravan of several thousand frightened, poverty-stricken, hungry people from reaching the U.S. border, begging for refuge from their dictatorial, crime-ridden native countries in Central America.

Funny, North Korea didn’t make it into the rhetoric of the campaign when Trump, in desperation, played on the fears of people fed up with crime, with shootings, with the massacre of worshipers at a Jewish synagogue. He apparently convinced so many voters that violence would prevail and the American economy would go to hell if those “leftist’ Democrats had their way that he actually did rather well in the midterms.

Historically in midterm elections, the party of the man in the White House has lost seats in the House of Representatives. The fact that Trump’s party of conservative Republicans still controls the Senate will put him in position to run for re-election as president two years from now.

Kim Jong-un can also help. Trump, after seeing Kim in Singapore in June, went around claiming that he had “solved” the North Korean nuclear problem where all his predecessors, both Democrats and Republicans, had failed. That obviously wasn’t true. North Korea has yet to do anything about denuclearization despite a show of destroying a nuclear test site that collapsed in the last nuclear test more than a year ago.

With the midterms behind him, Trump can think about his next summit with Kim, maybe early next year. He might consider more concessions, maybe giving up some of the sanctions imposed after each of North Korea’s tests of nuclear warheads and long-range missiles for sending them to targets as far as the White House. He might even consider an end-of-war “peace declaration.”

All, however, may not go according to plan. The “f” word — “f” for “flexibility” — keeps coming up as a rebuke to Trump for not giving up on “complete denuclearization.” Stop demanding Kim first give up its nukes, say the “flexible” crowd. Give the man what he wants, and then he’ll give you what you want.

Oh sure. As if the North had always responded with nice gestures to American and South Korean moves toward reconciliation. As if the North did a thing about “complete denuclearization” after Trump made the grand gesture of cancelling joint U.S.-South Korean war games right after his summit with Kim.

As if Kim has for a moment considered pulling back the thousands of artillery pieces that loom as a club over the Seoul-Incheon megalopolis. As if the North has done one thing about returning South Koreans held for many years up there or has considered regular, not sporadic and agonizing, visits between members of families divided by the Korean War.

As if “flexibility” were to be applied only to those obstinate Americans, not the North Koreans. Trump, as he returns to the topic of North Korea, may want to ask Kim if would mind showing a little flexibility too.