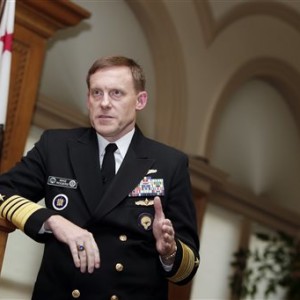 Artificial intelligence will play a big role in the future of U.S. strategy in cyberspace, according to National Security Agency Director Adm. Michael Rogers, who told Congress Tuesday that relying primarily on human intelligence “is a losing strategy.”

“[We’re] very much interested in artificial intelligence, machine learning, how we can do cyber at scale [and] at speed,” Rogers testified before the Senate Armed Services Committee Tuesday. “Because if we’re just going to take this largely human capital approach to doing business, that is a losing strategy.”

“It will be both incredibly resource intensive, and it will be very slow,” Rogers added. “That is a big area of focus for us.”

During a panel discussion last week, Rogers said an effective means of using man and machine together is the only sensible path to shaping comprehensive cybersecurity.

“If you can’t get to some level of AI or machine learning with the volume of activity that you’re trying to understand when you’re [defending] networks from activity of concern, if you can’t get to scale, you are always behind the power curve,” the NSA director told the Intelligence and National Security Summit in Washington, according to the Defense Department.

“It’s got to be some combination of the two,” added Rogers, who also serves as the commander of U.S. Cyber Command — the military’s chief offensive arm in cyberspace.

Rogers’ chief role at both agencies was a subject of contention Tuesday on Capitol Hill, where Arizona Republican and Senate Armed Services Committee Chairman John McCain blasted reports the White House is considering splitting the roles, with the possibility of installing a civilian as NSA director.

The White House declined to divide the “dual hats” worn by Rogers and his predecessors in 2013, when the idea was first pitched by an administration working group tasked with recommending reforms to NSA in the aftermath of leaks by former NSA contractor Edward Snowden detailing widespread digital surveillance programs.

At the time the president’s committee suggested the dual nature of the agency’s missions — one passive and one offensive — were contributing to the increasingly aggressive nature of NSA’s surveillance activities.

Recent reports claim Secretary of Defense Ash Carter and Director of National Intelligence James Clapper are urging President Obama to separate the roles before his administration ends in January.

“Let me be very clear,” McCain said during Tuesday’s hearing. “I do not believe rushing to separate the dual hat in the final months of an administration is appropriate, given the very serious challenges we face in cyberspace and the failure of this administration to develop an effective deterrence policy.”

The Arizona Republican senator said he would hold up any nomination for one position that didn’t encompass both.

“Therefore, if a decision is prematurely made to separate NSA and Cyber Command, I will object to the confirmation of any individual nominated by the president to replace the director of the National Security Agency if that person is not also nominated to be the commander of Cyber Command.”

The move poses a significant problem for any potential attempt by Obama, a lame-duck president, to separate the roles. The commander of U.S. Cyber Command would be subject to confirmation by the Senate, which faces a cramped legislative calendar hampered by this year’s election cycle. Rogers agreed the two posts should be headed by a single individual.

Splitting the dual hats also served as fodder for McCain’s ongoing criticism of what he described as the Obama administration’s lack of a deterrence strategy for cyberattacks, most recently manifested in hacks purportedly committed by Russia to interfere with U.S. elections.

Rogers, hesitant to go into specifics outside of a classified briefing, said it was possible for “capability to be applied in particular areas,” but added the decentralized nature of U.S. electoral infrastructure, which varies state to state, provides for a natural defensive structure.

“One advantage I do see from a defensive standpoint is that the structure is so disparate, with some elements being still very manually focused, others being more electronically interconnected,” Rogers said. “Because it’s not just one nationwide single integrated structure, I think that tends to help us here.”

Asked if such tampering was of concern, Rogers replied, “Oh yes, sir.”