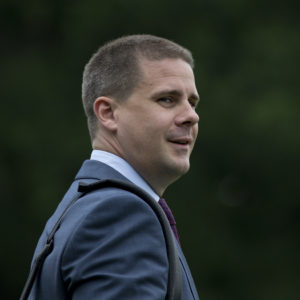 White House Press senior adviser Dan Pfeiffer, walks across the South Lawn of the White House to board Marine One, Tuesday, Aug. 6, 2013, in Washington, as he travels with President Barack Obama to Arizona to discuss the economy and the middle class and then to California to tape an appearance on The Tonight Show with Jay Leno. (AP Photo/Carolyn Kaster)

It’s been 268 days since Hillary Clinton held a press conference, but Dan Pfeiffer thinks the Democratic presidential nominee should keep the streak going through Election Day.

“I would go all the way to the end and not do a press conference,” the former senior communications adviser for President Barack Obama said on last Friday’s episode of the political podcast he co-hosts, “Keepin’ It 1600.”

Pfeiffer made his comments around the show’s 35:40 mark, eliciting a surprised “Wow” from his co-host Jon Favreau, Obama’s former speechwriting director.

“I would do a shitload of interviews, and I would do interviews with [tough reporters],” Pfeiffer added quickly, arguing that one-on-ones with journalists are actually tougher for candidates than press conferences.

Pfeiffer’s case is that interviews allow reporters to ask follow-up questions and challenge politicians to their faces. He said the rhythm of press conferences, by contrast, comes down to “question, soliloquy that may or may not answer the question, follow-up [question], different soliloquy, next question.”

This argument dovetails well with the Clinton campaign’s defense of its press strategy, pointing to over 300 interviews the former secretary of state has done this year.

One rebuttal to this, voiced by President George W. Bush’s communications director Nicolle Wallace last Wednesday, is that interviews aren’t as challenging since some have ground rules while press conferences are more freewheeling.

His other big objection to Clinton holding another press conference at this point was, essentially, that it would be a circus. Much of the mainstream media has now expressed public outrage at the lack of conferences and, from the perspective of Clinton aides, Pfeiffer said, “You know it’s going to suck when you do it, because the longer you wait the more like lunatics many of the people in the room have to act.”

Favreau agreed, but he argued Clinton should do a single conference to move past the issue.

“Let the air out. Just do one. Have them stop complaining about it,” he said of reporters.

“Keepin’ It 1600” gives Pfeiffer and Favreau a regular outlet to opine on the White House race, and their commentary is often quite candid. Friday’s episode included discussion of Republican nominee Donald Trump’s alleged effort to “pivot” and attract a broader swath of voters in the general election — a move the Obama West Wing veterans called superficial and meaningless.

“It’s a total bullshit thing,” Pfeiffer said. “You and I have been a part of many bullshit pivots.”

“Many a pivot,” Favreau said in agreement.

“We ‘pivoted to jobs,’ like, a thousand times,” Pfeiffer elaborated, “and every time the press was like, ‘Yet another pivot to jobs! Oh, [Obama’s] pivoting to jobs! Let’s write about that! They all fall for it.”