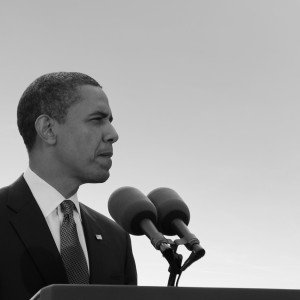 The resurgent debate over government access to encrypted communications crept back into the White House this week, where President Obama said Sunday he plans to start pushing the tech sector to help agencies “make it harder for terrorists to use technology to escape from justice,” months after his administration decided against encryption backdoors.

“And as groups like ISIL grew stronger amidst the chaos of war in Iraq and then Syria, and as the Internet erases the distance between countries, we see growing efforts by terrorists to poison the minds of people like the Boston Marathon bombers and the San Bernardino killers,” Obama said in his third address from the Oval Office Sunday night.

“And that’s why I will urge high-tech and law enforcement leaders to make it harder for terrorists to use technology to escape from justice,” the president added.

Ahead of Sunday’s speech a senior administration official told reporters the president would address the encryption issue, largely revived in recent weeks over a string of terror attacks that extended into California last week, along with terrorist groups like the Islamic State using social media to radicalize Muslims in the U.S.

“There are cases where we believe that individuals should not have access to social media for that purpose,” the official said. “That is a dialogue that we have been having with Silicon Valley.”

“At the same time we would not want to see certain methods of encryption making it impossible to detect and disrupt terrorist plotting,” the official continued. “This is a balance that we want to strike in partnership with our technology industry.”

Though the president refrained from mentioning encryption specifically or any concrete proposal addressing the issue — like most everyone else in government over the last year — the fact Obama brought it up at all marks a step backwards for the administration, which was largely thought to have settled the debate by coming down against government-mandated access earlier this fall.

“The administration has decided not to seek a legislative remedy now, but it makes sense to continue the conversations with industry,” FBI Director James Comey told a Senate panel in October.

That seems to have changed in the weeks since the deadly attacks in Paris, according to Comey himself, who said in November “the venom has been drained out of the conversation” on the problem of criminals and terrorists “going dark” online by communicating via commercially available end-to-end encryption products — something he’s been trying to convince lawmakers to address via legislation since last fall, when Apple and Google announced such services.

RELATED: Cops and Prosecutors Bring Encryption Fight Back to Congress

Comey is expected to continue his push Wednesday before the Senate Judiciary Committee, where he’ll likely be asked for an update on the FBI’s talks with Silicon Valley on the issue by Chairman Chuck Grassley, who expressed his own concern over the “going dark” problem earlier this year.

“The only way we’re going to reach a resolution on encryption that protects national security and privacy is to have an open and honest conversation,” Grassley said in September. “That includes keeping Congress informed about what’s going on.”

While Obama held off on naming specific social media platforms co-opted to spread extremism like Facebook — used by one of the attackers to declare allegiance to ISIS during Thursday’s attack in San Bernardino — his would-be front-running successor did not.

“If you look at the story about this woman and maybe the man, too, who got radicalized, self-radicalized, we’re going to need help from Facebook, and from YouTube and from Twitter,” Hillary Clinton said Sunday on “This Week with George Stephanopoulos.”

“They cannot permit the recruitment and the actual direction of attacks or the celebration of violence by this sophisticated Internet user,” she continued. “They’re going to have to help us take down these announcements and these appeals.”

On encryption, Clinton made a much more overt endorsement of finding a solution for intelligence and law enforcement to access encrypted communications than her predecessor.

“How about Apple? No more encryption?” Stephanopoulos asked.

“I have to believe that the best minds in the private sector, in the public sector could come together to help us deal with this evolving threat,” Clinton said hours before Obama’s Sunday address.