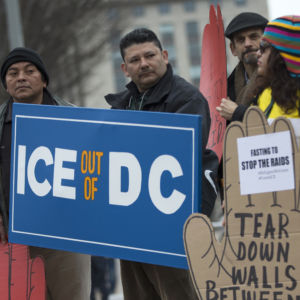 It came late in the afternoon, just as reporters headed home for their weekends. InsideSources only received it at 4:46 p.m.

And yet D.C. Council member Brianne Nadeau’s emailed denunciation of President Barack Obama’s immigration raids didn’t feel like a Friday News Dump at the end of last week. It didn’t seem like a press release meant to be buried. It was, in fact, the latest in a very public campaign the first-term Democratic lawmaker is waging against the administration’s aggressive deportation efforts.

As the representative for the District’s most racially-diverse ward, where Hispanics are more than 20 percent of the population, she’s particularly incensed by those targeting Central American mothers and children in the United States illegally, which are set to surge this month.

“Mothers and child refugees from Central America are fleeing gang threats, murder, extortion, rape and other abuses in addition to poverty and social exclusion,” Nadeau said in her Friday statement. “The federal government targeting these refugees does not make our country safer and will only put mothers and children back into the potentially violent circumstances they fled.”

The Council member went on to criticize the administration’s “failed strategies of deterrence.” Her comments followed the non-binding resolution she introduced in April calling for an end to the raids “as a matter of human rights.”

Both Democratic presidential candidates, Hillary Clinton and Bernie Sanders, have broken with Obama on this issue, saying they oppose raids that tear families apart and fill communities with fear. Senate Minority Leader Harry Reid has said the president should reconsider its coming “surge.”

However, the White House defended itself Friday, with Press Secretary Josh Earnest casting the escalation as “merely the continuation of operations that were announced in January and in March.” He told reporters at his daily briefing that raids focus on dangerous or criminal immigrants as well as those who crossed the border since 2014.

“No one is removed if they have an ongoing, pending claim or appeal for asylum or some other form of humanitarian relief,” Earnest said. He then took the opportunity to knock Republicans for questioning Obama’s commitment to the rule of law.

“This administration is serious about enforcing the law,” he said. “And I recognize that our political opponents don’t like to acknowledge that fact. But we’ve made clear how we’re going to use law enforcement resources to enhance our border security and to enhance the security of communities across the country.”

Of course, Nadeau doesn’t believe this makes her community secure. Like Clinton, whom she backs in the 2016 campaign, the Council member talks about fear and stress — she faults the president for that.

“Unfortunately, as much as I love President Obama, his administration has had the most raids of any administration,” she said in an interview with InsideSources. “We have people in need that have found refuge here, and instead of fostering their growth and helping them contribute to our communities, we’re terrorizing them, and that’s really disgraceful.”