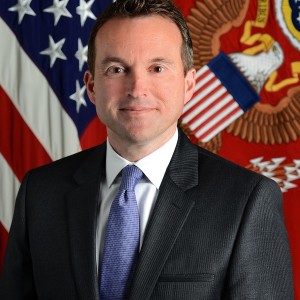 When President Barack Obama nominated Eric K. Fanning in September as the first openly gay secretary of the Army, the pick was cheered by many as proof of the administration’s commitment to LGBT rights.

Two months later, the White House has quietly promoted Fanning to acting secretary – despite lingering questions and disagreements that have held up a confirmation hearing for the nominee in Chairman John McCain’s Senate Armed Services Committee.

Fanning, a former Clinton administration operative whose nomination has drawn criticism from some on the right, including Republican presidential contender Mike Huckabee, was named acting secretary by the president on Nov. 3.

Fanning’s nomination was dismissed in September by the former Arkansas governor as a “social experiment.”

“It’s clear President Obama is more interested in appeasing America’s homosexuals than honoring America’s heroes,” Huckabee said in a September statement released by his campaign. “Veterans suicide is out-of-control and military readiness is dangerously low, yet Obama is so obsessed with pandering to liberal interest groups he’s nominated an openly gay civilian to run the Army. Homosexuality is not a job qualification.”

One of Huckabee’s rivals for the GOP presidential nomination, Texas Sen. Cruz, has also spoken out on Fanning. Cruz told an Iowa crowd earlier this year he would “wait until his confirmation hearing to assess his record on the merits,” but “I certainly hope that the secretary of the Army is being nominated because the president wants the right person to defend our nation and not because he is looking to make a political statement on issues of sexual orientation.”

If confirmed, Fanning would be the first openly gay secretary of a U.S. military branch and one of the most visible symbols of the administration’s efforts to transform the military’s culture on sexual orientation. Obama, in his second year in office, ended the “Don’t Ask, Don’t Tell” policy that prohibited gays and lesbians from serving openly. Earlier this year, he moved to add those who identify as transgender to openly serve, a change Fanning has long supported.

“I think that the military is stronger, institutions are stronger, and society is stronger the more inclusive that we are,” Fanning said in a 2013 interview. “So, wherever we can root out discrimination, I think it’s a positive thing.”

Fanning, a 47-year-old Ivy Leaguer (Dartmouth, 1990), has never served in uniform but has worked on defense issues for two administrations and emerged as the point man for some of the Obama administration’s most ambitious policies.

He’s held several high-ranking posts at the Pentagon, including in the past year acting under secretary of the Army and chief of staff to Secretary of Defense Ash Carter.

His stalled confirmation has become embroiled in other issues important to Capitol Hill Republicans, including the standoff between the White House and senators opposed to Obama’s efforts to close the prison in Guantanamo Bay, Cuba.

Two days after Obama elevated Fanning to acting secretary, Sen. Pat Roberts, R-Kansas, announced he had placed a hold on the president’s pick, preventing the nominee from getting a vote in the Senate.

Roberts, who is opposed to the relocation of Guantanamo’s terror suspects to Fort Leavenworth in his home state, is holding Fanning as leverage to dissuade the White House from moving ahead with long-promised executive action on the Cuban prison.

Fanning’s promotion also seemed to have been aimed squarely at McCain, who is at odds with the White House over Obama’s veto of the Republican defense spending bill last month. The Arizona Republican has bottled up Fanning and other civilian nominees in his committee, refusing to schedule confirmation hearings.

Another Republican, California Rep. Duncan Hunter, has called for delaying Fanning’s confirmation until the Pentagon answers questions about whistleblowers the congressman says have been punished for criticizing U.S. military policies and making public details about child rape among the Afghan forces fighting alongside Americans in Afghanistan.

On Monday, Hunter, a former Marine and a member of the House Armed Services Committee, said he was puzzled by the elevation of an administration official with no experience in uniform.

“Through it all, given we have been at war for more than a decade, it’s still lost on me why there aren’t more senior civilian leaders at the top level of the services with the type of military experience that could help lead in the modern era,” Hunter told InsideSources. “Often times, that personal experience is lacking and it shows in a lot of the decisions that are made at the top.”

Hunter, 38, was optimistic, however, that Fanning could address some of the issues facing the Army.

“If he’s confirmed, he won’t have a lot of time, but it’s never too late to start repairing a lot of the problems that have been created over the last few years. On personnel actions alone, soldiers, especially in the special forces category, have been run-over by an out-of-control bureaucracy and there’s a lot of distrust because of it. If Fanning can just commit to addressing that even, I think that alone is enough to distinguish himself from the previous leadership and it’s constructive.”

Other Capitol Hill conservatives contend Obama’s Nov. 3 promotion of Fanning amounts to a new example of executive overreach, telling InsideSources that naming someone who is awaiting confirmation by the Senate to an acting position amounts to a circumvention of the Federal Vacancies Reform Act.

The president ran afoul of that 1998 law earlier this year when the D.C. Circuit Court of Appeals struck down a 2014 National Labor Relations Board ruling with a finding that the agency’s acting general counsel had been appointed by Obama in violation of FVRA.