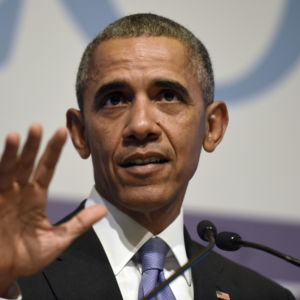 Obama Under Fire Over Transparency as Congress Advances FOIA Reform

Despite claiming to run the “most transparent” administration in history, President Barack Obama “set a record again for censoring government files or outright denying access to them last year under the U.S. Freedom of Information Act,” according to the Associated Press.

Now bipartisan bills to create more openness through FOIA are advancing through the Republican Congress, but support from Obama, a Democrat, is by no means guaranteed.

Government Executive reported Friday that “White House spokesman Josh Earnest has said the president would sign the Senate version of the bill passed last month,” yet “the measure the House passed in January has some stricter requirements that need to be negotiated.”

In the meantime, the president is taking heat over his administration’s previous resistance to reform: “a coalition of 47 transparency advocacy nonprofits last month wrote a letter to the White House expressing displeasure with some Justice Department objections to the earlier bills, which only recently came to light under — of all things — a FOIA request.”

These nonprofits voicing “deep concern” included big-name political players like the liberal American Civil Liberties Union and the conservative National Taxpayers Union, as well as press freedom and open government organizations like the Sunlight Foundation. Their gripe was with an internal “talking points” memo from the White House and the Justice Department in 2014, which argued that FOIA reform proposed that year would actually increase backlog and processing problems while raising costs.

The existence of this memo was discovered through a FOIA request from the Freedom of the Press Foundation and first reported last month by Vice: “It Took a FOIA Lawsuit to Uncover How the Obama Administration Killed FOIA Reform.”

In response, the 47 transparency advocates wrote that the Justice Department was “at variance with the underlying intent of the FOIA, good public policy, common sense, and the administration’s oft-stated position on transparency. That it required a lawsuit by a reporter to uncover the DOJ memo and the secret lobbying by administration officials in opposition to the legislation speaks volumes.”

The Obama administration has received sustained criticism — and charges of hypocrisy — over lack of transparency since its inception. Just this month, National Journal columnist Ron Fournier said it was “the least transparent administration probably in this nation’s history, certainly in modern time.”

Many journalists find this issue particularly galling as Obama periodically offers up prescriptive media criticism, including a formal lecture on how the press could better do its job, delivered at last month’s ceremony of the Toner Prize for Excellence in Political Reporting.

“Many believe that Obama’s call for us to probe and dig deeper and find out more has been made far more difficult by his administration than any in recent decades,” CNN’s Jake Tapper said on his television show following the speech.

As Tapper and others pointed out, lack of transparency is just one part of the president’s crackdown on investigative journalism. More than any of his predecessors, he has used the Espionage Act to prosecute the government whistle-blowers who are invaluable sources for reporters. It’s ironic, given the widespread belief that the press favored Obama strongly when he first ran for the White House in 2008.

“Most of you covered me,” the president said during a comedy routine at his inaugural White House Correspondents Dinner. “All of you voted for me.”